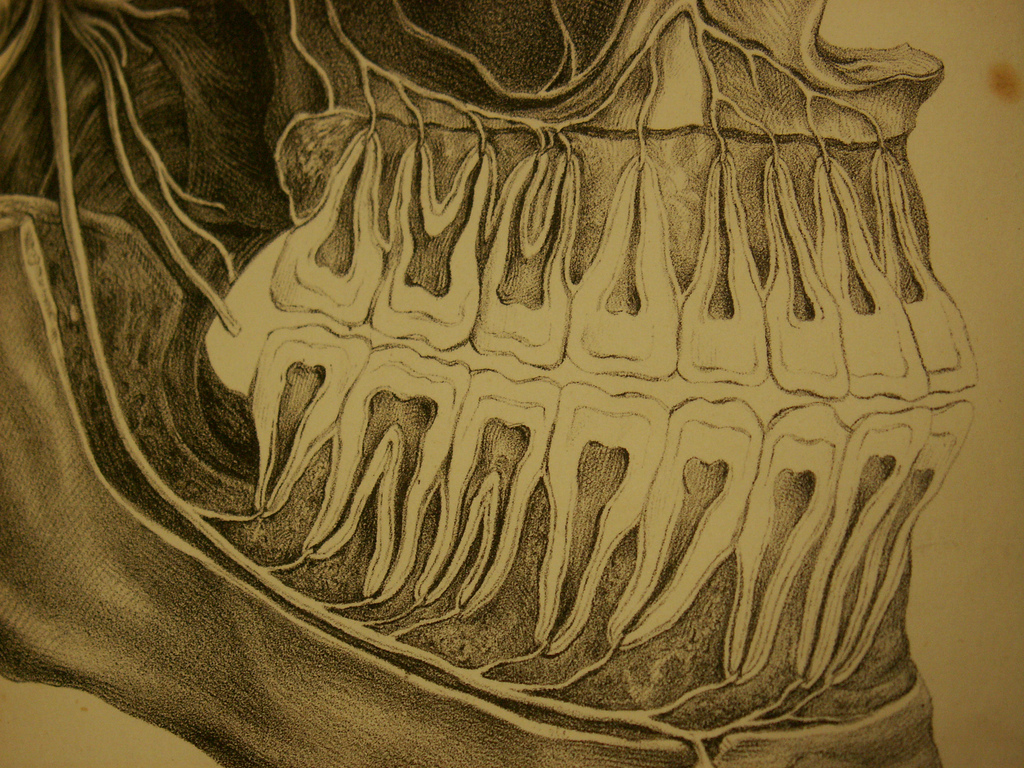 I was eating a delicious Vietnamese noodle salad with pork crackling yesterday, when an unfortunately placed bite put a sudden stop to an otherwise lovely lunch out.

Thing is, I’ve had some dental work that’s rendered a few of my molars rather brittle, and one of them splintered after biting what I guess was a particularly resistant piece of crackling. That afternoon, mentally prepared to lose this already structurally compromised and probably irreparable chomping tool, I went into my emergency appointment with apprehension — and came out fully mended. I’ve been assured my tooth has at least ten more years before it decides to leave me for good.

The lost corner of my molar has been reconstructed from several chemically complex materials, one of which is glass ionomer cement – a powder made out of alumina, silica, fluoride, cryolite and a list of other chemicals mixed with a solution of polyacrylic acid. This stuff turns into a hard, fluoride-releasing seal that chemically bonds to whatever tooth you have left and allows for pretty impressive reconstruction work to be built on top of it. It was invented in the late 1960s and is one of the most common dental restoration materials used today.

Dentistry wasn’t always the highly efficient, relatively painless albeit uncomfortable experience it is today (at least in such privileged countries like Australia). Up until the 17th century a person with tooth problems could do no better than go to a barber-surgeon who would take pliers and remove the rotting, painful, cracked and infected tooth. Of course, there was no anaesthetic.

Humanity had been suffering all kinds of brutal, primitive and excruciating dental treatments for thousands of years, until in 1723 a French physician Pierre Fauchard laid the foundation for the practice as it’s known today with a book that’s regarded as the first complete scientific description of dentistry. Fauchard was the person to figure out that candy – rather than worms, which was the prevailing theory for centuries – causes tooth decay; he recommended braces for correcting children’s teeth, introduced routine use of fillings, and many other useful things.

Thanks to people like Fauchard and a long line of dedicated surgeons, dentists and researchers that came after him, today even a serious dental problem can be miraculously solved. Thanks, guys.