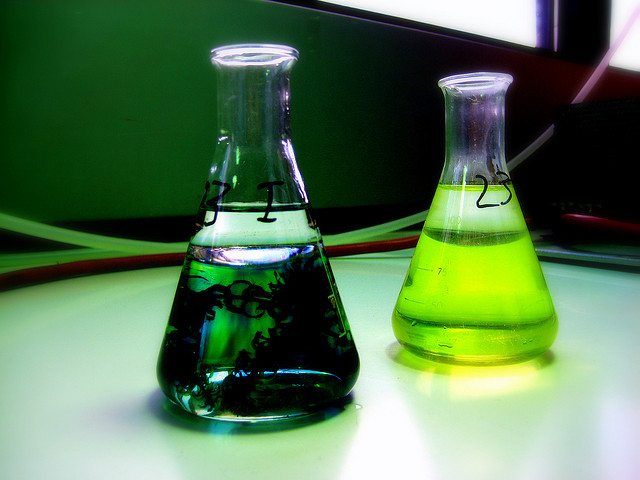 These beakers will make you think this post is more scientific than it is. | By tk-link - CC BY-NC-SA 2.0

Nine out of ten women saw an improvement in two weeks, this acne cream was tested in a laboratory so you can trust us when we say it will reduce swelling in just 20 minutes, check out this percentage figure on our space-age packaging, it is trivial but you will get the impression our product works!

Of course, our consumer culture is infused with semiotics that make us feel and assume certain things based on the presence of a particular detail. Green, earthy packaging for eco products, silver and transparent plastic for high-tech, and so on.

However, even if you are a critically thinking person who also likes science, these subliminal messages may affect your judgement. Bummer.

Recently a couple of scientists at Cornell University found that adding a completely trivial graph to a descriptive paragraph about a medication made people more likely to claim the drug works based on the information they received.

They recruited 61 participant to read info on the drug; half of the participants read the text accompanied by a graph that presented no new information. As a result, 96,6% of the ‘graph group’ answered that the medication is effective; in contrast, only 67,7% of the graph-free answered the same.

This isn’t particularly shocking, though. I’m pretty sure I’ve seen research before with similar results. However, the study didn’t end there. Two additional trials were run, and in the second one upon answering the question about whether medication is effective, participants were also asked to indicate how strongly they agree with the statement “I believe in science.”

The people who saw the graph and had faith in science were the most persuaded about the efficacy of the medication. Even though there was nothing really scientific about the graph, as it was a trivial, “scientific looking” element.

Now, this part I actually find disappointing. Surely science-minded people would be able to tell a crappy graph from a useful one? I also don’t think that asking about faith in science is a correct way to phrase the question, because science isn’t about belief. If I were a participant in that study, I’d be pretty annoyed about that phrasing.

However, the results do serve as a nice reminder that sometimes we just go by our gut feeling based on what the information we see ‘feels like’. If there’s a percentage on my anti-wrinkle face cream bottle, surely it feels more reassuring that it actually works. Nine out of ten women!

Once we keep the existence of these messages in mind, they do get easier to spot. Be vigilant, particularly if you “believe in science.”