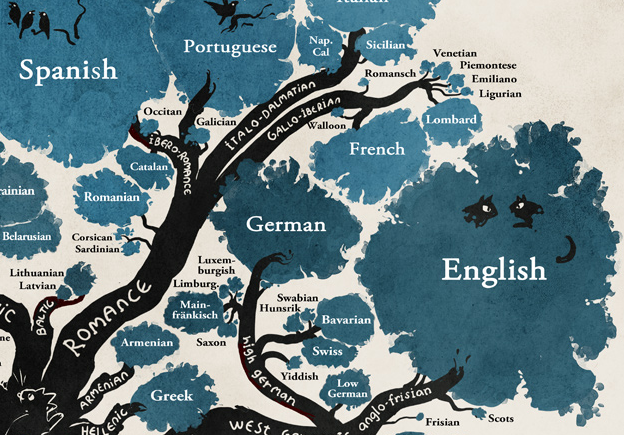 A fragment of the Indo-European language tree drawn by Minna Sundberg.

As a kid I went through quite a few drawing pads. One of them had a wonderful cover image that I meticulously cut out and kept for years. It was a drawing of a tree, with each leaf representing a language in the Indo-European language family. I studied this drawing so often, after a while it was just natural for me to recount where any language sat in relation to others. I still remember quite a lot of it, and am able to stand my ground when people at dinner parties ask whether my native language, Latvian, is similar to Russian.1

The language tree is, of course, a scientific metaphor, and I find it so elegant I’ve never been able to think about the historical relation of languages in any other way. Akin to a family tree, the language tree branches from a common, ancient proto-language to groups of descendant languages, both dead and still in use.

Even though the Indo-European family contains the languages spoken by 45% of the world’s population today, it is not the largest in terms of languages it contains. That honour goes to the Niger-Congo family, which contains a whopping 1,532 languages. Indo-European can boast only 439.

Overall, it is estimated there are 147 language families in the world, and around 6,900 languages. And not all of these languages even belong to a family. These ‘unrelated’ languages are known as isolates, in effect a family all by themselves. Basque and Korean are examples of being isolates, while Greek is known as an isolate within its own family (Indo-European), because it occupies a whole branch by itself.

For a beautiful representation of all modern Indo-European languages, check out this gorgeous comic-infographic tree (with cats!) over at the Stand Still. Stay Silent webcomic by Minna Sundberg. I’ve included a small fragment in the feature image of this article, but you really must see the full thing.