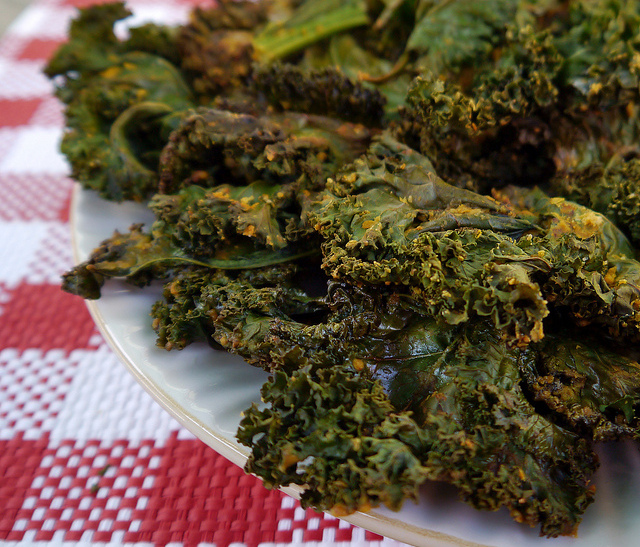 Have you tried kale chips? They're ridiculously good. | By Kelly Garbato - CC BY-NC-ND 2.0

When a plant is domesticated over years and years of painstaking selection, what you eventually get is a cultivated variety of the wild species. Hence the usual carrots are bright orange as opposed to their pale and mildly toxic wild relatives. Similarly the wild ancestor of maize used to have the tiniest seed grains instead of the plump, sugary kernels we enjoy today.

Cultivars form the backbone of the world’s agricultural food supply, since nearly all the major crops have been bred from plants with the most desirable characteristics you would want in a food plant — more nutrition, higher yield, resistance against nasties, and so on. In a sense, humans helped along the plumpest, most orange, most sweet carrots to get where they are today.

What’s fascinating about cultivars is the fact that, in scientific terms, it’s still the same plant. Let’s take cabbage cultivars, for example. Here we have the trendy, curly, strong-tasting ‘superfood’ kale; the unpretentious, reliable cauliflower; the dense, watery green cabbage; the totally weird and who-came-up-with-this Brussels sprouts, not to even mention a bunch of other relatives.

All of them — yes, even Brussels sprouts — share the same Latin name, Brassica oleracea. Despite the many dramatic differences between a purple kohlrabi and a bushy broccoli, put those two in the right setting and they can produce (probably weird) cabbage babies, which is another way of saying they can interbreed, a characteristic reserved to things that are of the same species.

What does the wild version of B. oleracea look like, then? Unsurprisingly, it is a scruffy-looking, dark green plant known as ‘wild mustard’.

It’s native to the coastal areas of western and southern Europe, and I’m willing to bet it probably doesn’t taste very nice. However, it has a noble, and delicious legacy of seven distinct cultivar groups, and at least one of them — the Romanesco broccoli — probably aces beauty contests on a regular basis. It can thank its fractal-like qualities for the good looks.

Bonus: To read a long, fascinating and very detailed article about all these cultivars, visit this blog right here.