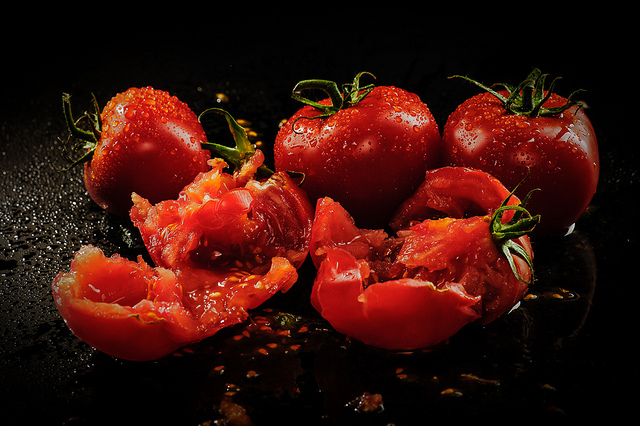 The tomato is probably one of the most popular vegetables1 in the world. Used for centuries in the cooking of the ancient Mesoamerica, the tomato was introduced to Europe in the 16th century. Even though today tomatoes are widely used in cuisines across south-western Europe and beyond, upon their arrival in Italy and France tomatoes were mostly grown as ornamental plants.

That was because tomatoes were considered poisonous. However, according to the Smithsonian, it was all a misunderstanding:

A nickname for the fruit was the “poison apple” because it was thought that aristocrats got sick and died after eating them, but the truth of the matter was that wealthy Europeans used pewter plates, which were high in lead content. Because tomatoes are so high in acidity, when placed on this particular tableware, the fruit would leach lead from the plate, resulting in many deaths from lead poisoning. No one made this connection between plate and poison at the time; the tomato was picked as the culprit.

Once the delicious tomato overcame this marketing problem, its consumption spread like wildfire. Italian cuisine, to name just one, is difficult to picture without tomatoes, and quite a few of the world’s favourite dishes  feature them prominently.

But why are we so fond of tomatoes? I believe it may have something to do with their chemical content. More specifically, it’s the glutamic acid — one of the most abundant naturally occurring amino acids, which is found in meat, fermented foods, as well as some vegetables and fruit. While the acid itself produces little flavour, dissolved into ions known as glutamates and combined with a group of chemicals called ribonucleotides, it creates the taste sensation known as umami. That’s the savoury, pleasant taste one would associate with things like broth, a piece of cheese, or… tomato sauce.

In Asian kitchens you wouldn’t see many tomatoes, but they capitalise on fermented sauces and broths, such as soy sauce, dashi, miso and others. One of the easiest ways to achieve the umami pleasure is through the use of good old MSG or monosodium glutamate — the crystallised salt form of glutamic acid.

However, in Mediterranean cooking one would not resolve to such crass methods. Here you have anchovies, salted olives, stock and tomatoes. For a real umami kick, add a tablespoon of concentrated tomato paste.2 Celebrity chef Heston Blumenthal even co-authored a paper on the glutamic acid content in various parts of different tomatoes, and came to the conclusion that you should not toss the seeds when cooking with fresh tomatoes.

So really, tomatoes are kind-of like nature’s MSG. Thanks, nature!