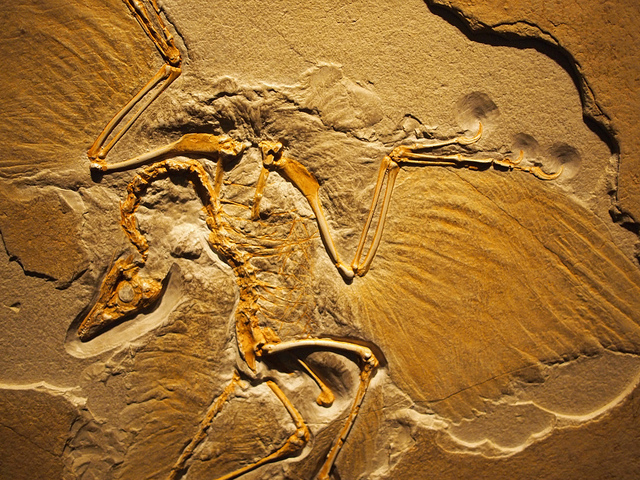 A cast of "the first bird," an Archaeopteryx litographica fossil from Germany, with clearly visible feathers | By Denise Chan - CC BY-SA 2.0

Every first Thursday of the month Australian Skeptics host a Skeptics in the Pub event, where people get together for a drink, a chat, and an interesting talk.

Tonight’s talk was by John Pickrell, the editor of Australian Geographic magazine, and author of a recently published book Flying Dinosaurs: How fearsome reptiles became birds.

It’s an excellent science story on many levels. Firstly, the topic is dinosaurs, one of the most popular natural history elements ever. Ever since humans figured out that our planet was once dominated by these gigantic mystical creatures, we have became enthralled with them.

But the story about dinosaurs doesn’t stop there – at the mere fact that they existed. The ongoing research and discovery that uncovers more and more details about these ancient creatures brings out plenty of surprises, too. We used to think of them as reptile creatures, grey-green, covered in scales, menacing and roaring. But in the last 20 years there have been discoveries that have turned everything we thought we knew about dinosaurs on its head.

John’s book on flying dinosaurs is a reminder of the wonderful, never-ending journey of scientific discovery. Through exploring the evolution of feathered dinosaurs and their close relation to modern birds, he paints the complex and fascinating picture that only careful  paleontological1 research can help reveal.

In 1996 the first feathered dinosaur was discovered in China, and since then dinosaurs have never been the same. We now know they had feathers, beaks, teeth, some of them had four wings, and they sounded nothing like the ones in movies.

And, as John reminded us at the end of his talk tonight, the best might still come. A new dinosaur species is discovered every week, we know the true plumage colours for some of them, and we’re getting better and better at picturing what these creatures were like, even though they occupied the Earth a ridiculously long time ago, and for far longer than humans ever have.

And they’re not gone, not entirely. Next time you look at a bird, remember they’re not that distant from dinosaurs.