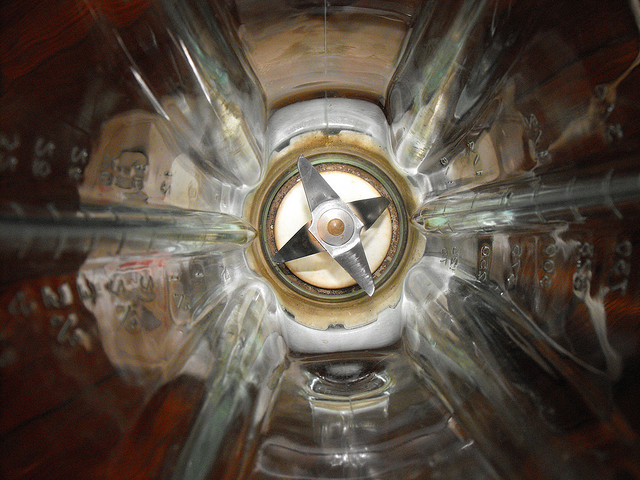 Tonight in my kitchen, as I was chopping onions for a ‘palak paneer’ curry with the help of a stick blender processor, I started thinking about the forces involved that transform a bowl of onion bits into considerably smaller onion bits. What exactly happens in a blender?

The first stage is simple enough to understand — as the blades spin through the pieces of onion, they chop them into smaller pieces, while stirring the contents of the processor bowl, thus achieving a fairly uniformly chopped product. The more onion pieces in the bowl, the more crowded the space, the easier for the blades to hit each individual piece and hack it into smaller ones.

However, if I were to produce a smooth onion puree, continuous blending wouldn’t be enough, because at some point the pieces become too small to be hit by the blades with enough precision, and the blender doesn’t generate enough energy to hit them hard enough. I would need to add some water to help unleash the hydrodynamic forces that tear food into smaller and smaller particles.

The spin of the blades pulls liquid from the top of the processor bowl and throws it to the sides. This is known as a shear force — when different parts of a body (in this case, onion goo) are pushed in different directions in a non-symmetrical fashion.

The fun doesn’t stop there — as the blades flick through the now liquid onion puree, they also create tiny air bubbles, which quickly collapse on themselves. This is the most important force involved in creating smoothness. The implosion of these air pockets in the liquid creates powerful shockwaves that rip the surrounding pieces of food into smaller particles still. This force is known as cavitation.

So there you go. Next time you wonder how just two pieces of metal at the bottom of a blender can transform a whole bunch of solid items into a fruit smoothie, you’ll know that it’s not just the chopping, but also the stirring, the shearing and the cavitation. I think it’s a neat conversation starter for when you’re waiting at a juice bar.

Bonus: if you want to watch the physics of blending explained in a high-speed camera video, click here.