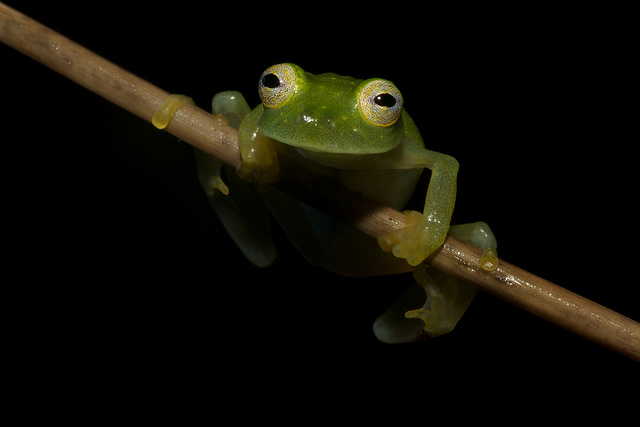 I think frogs are adorable. Just look at the little guy in the above photo! This particular species is Hyalinobatrachium colymbiphyllum, known as plantation glass frog, and it is found in Costa Rica, Colombia, and Panama.

Probably one of the cutest frogs I’ve ever seen, the plantation glass frog sports a lime green skin with yellow spots, big, adorable eyes, and very webby fingers. It lives in humid lowland areas, hanging out in trees along forest streams and rivers.

But it also has one more feature, which gives the glass frog its lovely name. The skin on the frog’s stomach is translucent – so much so you can see all the internal organs and their action, as well as the beating of its little purple heart.

Why would an animal that lives in trees need translucent skin? Sure, the world’s seas are full of things like jellyfish and other creatures that are largely translucent, but it is easy to imagine the usefulness of that – when you float in water, translucent flesh renders you effectively invisible.

On the other hand, why would the underbelly of a frog be transparent? It turns out that there is no clear answer – although there are, of course, hypotheses. One of them looks for the solution in the frog’s fascinating anatomy. In glass frogs key internal organs are covered in patches of cellular organs that reflect light – these are called iridophores, and are similar to the stuff found in reflective animal eyes.

Being able to reflect sunlight off vital organs one area at a time might provide these little amphibians with an efficient form of body temperature regulation. It might also be that coupled with other skin features the translucency acts as a type of camouflage. Scientists who study glass frogs might figure this out eventually. Meanwhile, we can just admire the appropriately named creatures.