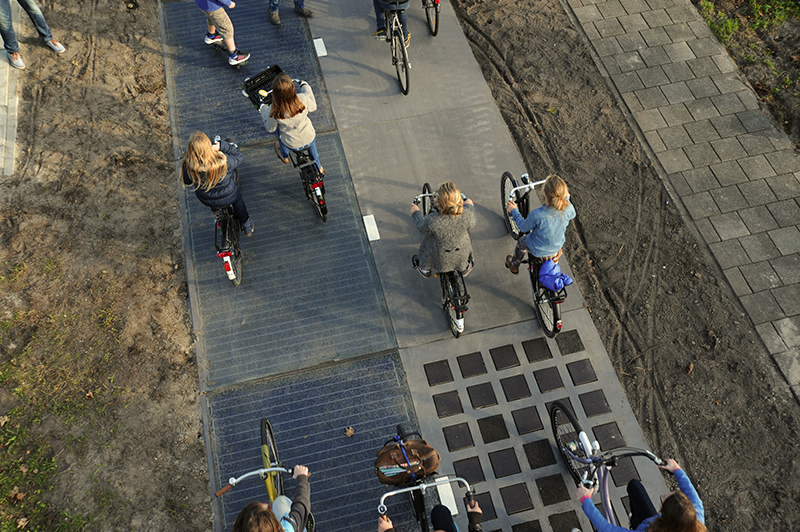 Remember Solar Freakin’ Roadways? The crowdfunding campaign video was so well done, it took off better than a video full of kittens doing cute things. It’s an undeniably sexy narrative formula – current roads are crappy, expensive, bad for the environment, old, boring. We can make far, far better roads out of electronic, interconnecting glass solar panels that will look just like fancy future tech from comic magazines, and their hypothetical benefits will be so amazing it would actually be like living in the future.

I got hooked on that video as well. It’s remarkably well produced.

However, as with anything that attracts a lot of attention, it also will attract criticisms – both real and imaginary. Some of the most common ones involve scaling a proof-of-concept up to an infrastructure level to actually replace existing road covers. Then there are questions about whether driving on glass panels would actually be possible in the long term, about dirt on the road obscuring the solar cells, about flat solar panels being less efficient than slanted ones you might find on roofs and things, about all the parts of the tech that are actually not invented yet, or tested at large enough scales. A lot of valid criticisms, and not enough solid answers.

Even despite all this, I do like getting excited about ‘future technology’ of this kind, because it involves thinking out of the box, putting an environmentally sensitive spin on things, and reminding us all that the status quo can, in fact, change.

And because of all these considerations, learning that you are already living in the future can be pretty neat. Kind of. Just last month the world’s first public solar road was officially opened – a 70 metre bike path in a little Dutch town Krommenie – not far from Amsterdam.

Built out of rows of concrete-encased silicon solar cells with a 1-centimetre layer of tempered glass on top, the bike path has been installed at a slight tilt, to help rainwater wash dirt off the transparent surface. Only one lane of the path contains solar cells, the other side being used for the testing of various surface materials for the path. It’s pretty cool, although it’s not quite a solar freaking roadway yet.

For starters, it doesn’t even power anything.

Right now the path is really just a test run to answer questions about actual energy production and practicalities. Eventually the path might power light poles, electric vehicles, nearby households and whatnot, but for now the Dutch company that invented this tech is just testing where this will go, and what improvements the technology might require. You can’t find this stuff out if all you do is theorise, so good on them.

Meanwhile, while we’re still waiting for freakin’ roadways, there do already exist perfectly acceptable and relatively widespread uses for solar power. From heating the swimming pool to roof panels to little garden lanterns, we are starting to tap that incredible energy flowing from our giant ball of hydrogen. I’m sure we will come up with more crazy uses as we go along.

Meanwhile in Eindhoven… The Dutch sure know how to get creative with their bike paths.