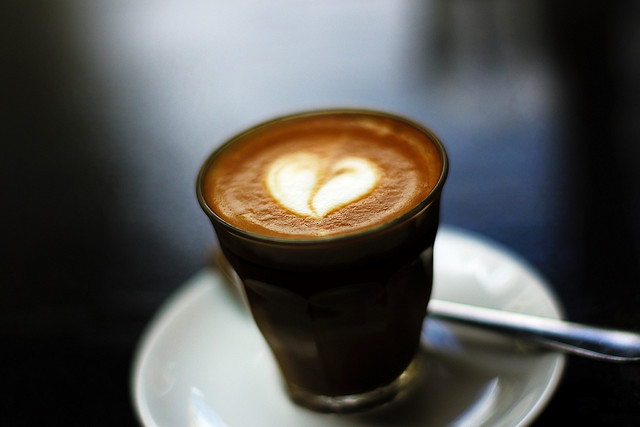 What colour is your coffee mug? Perhaps you prefer to drink it from one of those fancy-looking glass vessels, and swear by it because to you it somehow just tastes better?

Turns out there might be some truth to that.

Recently a team of psychologists published a study in a journal called Flavour, a publication dedicated to researching all aspects of flavour – from psychophysical to chemical.1 In it they speculated that the colour of a coffee mug might influence the perceived taste of coffee, and found that indeed to be the case – to an extent.

The lead author of the study, George Van Doorn, lives in Australia, and seems to go to cafés a lot (we do indeed have a bit of a wanky coffee culture going on here). One day a barista mentioned to him that when you drink coffee from a white mug, it tastes more bitter than it does from a glass mug.

When you say something like that to a psychologist, they are bound to go and investigate, particularly if this idea hasn’t been tested before. The relation between colour and flavour is something that has been on the research agenda for a while, and there has even been a study in which participants had to rate which coffee, drunk from a range of different-coloured cups, was the warmest. So Van Doorn and a couple of colleagues set out to test the coffee taste and colour interaction. Why not?

They picked three mugs that were as similar as possible in every aspect except for colour – white, blue, and transparent. Participants were asked to drink a latte from one of the mugs, and afterwards rate bitterness, sweetness, flavour intensity and other characteristics of the coffee. The initial test showed that people who drank coffee from the white mug rated it as more intense.

After repeating the experiment with more volunteers and this time using identical cups that only differed in the colour of the grip (see photo), the researchers found that this time coffee drunk from the white cup was rated as significantly less sweet.

This effect is referred to as a crossmodal influence – when something from one sensory input, like vision, has an effect on a different input, such as taste. And even though it’s not exactly clear whether it’s the colour contrast between the mug and the drink, or some other aspect that’s causing the perceived flavour difference, it’s something to note next time you have a coffee. Maybe your white coffee mug is making the coffee taste too intense.