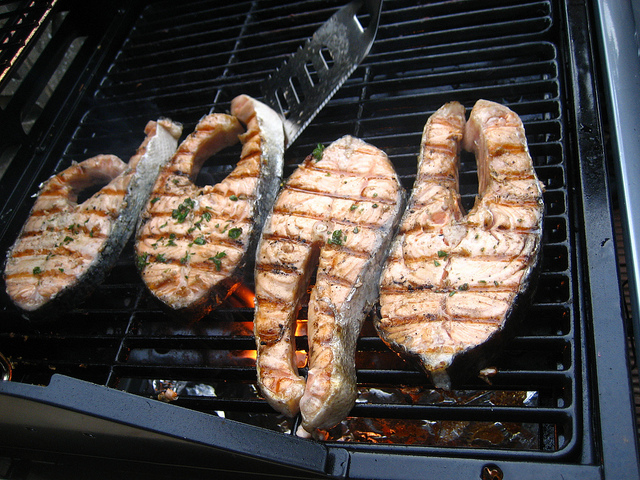 Coined in 2005 by Stephen Simpson and David Raubenheimer, this theory purports that the reason why the whole world is getting fatter may have to do with our need to seek out optimal protein levels in the diet.

As the researchers wrote in Obesity Reviews, “when humans are forced to trade-off protein intake against that of carbohydrate and fat on nutritionally unbalanced diets, physiological regulatory mechanisms prioritize protein.”

What that means is that if you have 200 grams of salmon steak, that will yield a lot more protein than 200 grams of rice – but it’s really the protein content that your body is especially watching out for. If your protein intake drops below the generally recommended 15%, you will start eating more foodstuffs overall – just to find that missing protein content. Before you know it, you’re overeating as well.

One of the reasons why we don’t always eat the right amount of protein may be because good protein sources are more expensive than other foods, particularly the ubiquitous processed fare. However the researchers also hint to the CO2-induced nutritional depletion I mentioned a few days ago. With less protein in the plants we have been consuming for centuries on end, we end up eating more of them.

By formalising this hypothesis in a mathematical model, the scientists were able to come up with a framework called ‘nutritional geometry’. Recently they used this approach to bring together a range of disparate factors that have been linked to obesity in humans – such as shift work or feeding babies with formula, for example. They even extended this approach to pet nutrition, because dogs, cats, and horses have been getting fatter, too.

According to Reubenheimer, an ecological approach may be just what is needed to truly understand humanity’s expanding waistline: “It is clear that obesity is more than just a medical problem, so we’re using an ecological approach to understand how human biology – in particular the details of the human appetite – interacts with modern food environments to drive health problems.”

The bottom line – once again the sensible thing to do proves to be eating a balanced diet. Unless you can completely steer clear from snacks, stuffing your face exclusively with veggies won’t do the trick. Watch your macronutrients.