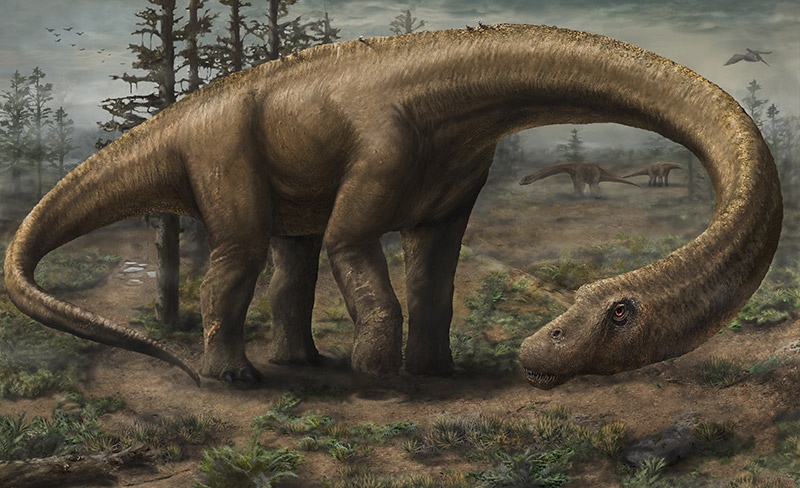 Rendering of the massive Dreadnoughtus schrani in life. | By Jennifer Hall, via Drexel University

Several new dinosaurs are named each year – according to some sources, as many as one every seven weeks or so. There is good reason to be fascinated with the long-gone creatures that once roamed the Earth. From lumbering giants to agile little hunters, dinosaurs in their vast diversity lasted over 160 million years.1 Compare that to the measly 200,000 that modern humans have existed.

Some of the dinosaurs were terrestrial giants, with no modern animal coming even close to the towering heights these ancient creatures achieved.

This year we learned about one to trump the vast majority of them.

The greatest dinosaur of 2014

Dreadnoughtus schrani wasn’t simply the heaviest dinosaur described in a scientific journal this year – it is thought to be one of the largest animals that ever existed. The 65 tonnes of weight make it heavier than a Boeing 737-900 plane, and a length of nearly 26 metres makes it longer than two double-decker buses. For an added coolness factor, it is named after a British battleship that ‘feared nothing.’

The fossilised remains of Dreadnaughtus were found in southern Patagonia, Argentina, and described in Scientific Reports in September. It belongs to the diverse titanosaur group of sauropods – huge, long-necked herbivores with tiny heads. This particular beast is thought to have lived in the late Cretaceous period somewhere between 84 and 66 million years ago.

It is easy for palaeontologists to give in to flights of fancy when truly large bones are found – usually titanosaur remains are fragmentary and scant, and a lot of the facts about the animal need to be extrapolated from what few bones they have. In the case of Dreadnaughtus, however, there was ample evidence. The skeleton found is the most complete of any giant dinosaur, representing around 70 per cent of the body, as well as some parts of the skull.

Because of the unprecedented amount of bones found we can be sure that estimates of its weight and size are especially accurate. And this discovery may also pave the way to a better understanding of other long-necked dinosaurs.

Now, there were some ‘even bigger’ bones found in Argentina in May, but as far as I can tell, this critter doesn’t have a name and hasn’t been scientifically evaluated, yet. Perhaps time will tell which beast was largest of them all – but this was not the year.