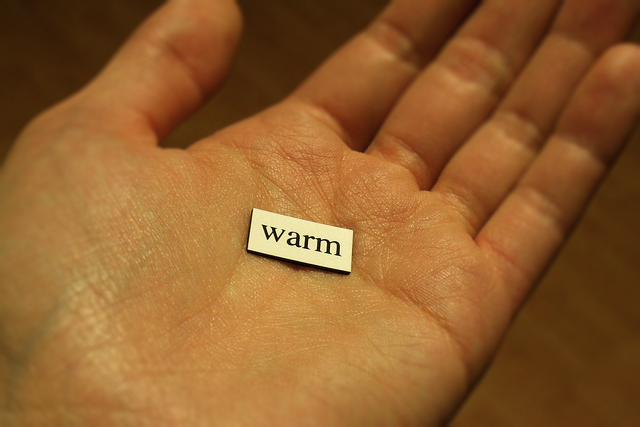 If you lived in Japan in the Edo period (1603-1868), you would be heating up stones, wrapping them in cloth and stuffing them in your clothes to provide a soothing application of warmth. The practice of using warming methods of this sort is believed to have started way back in 12th century and is connected with Chinese medicine.

This is allegedly the origin of “kairo”, literally meaning “fire inside the pocket.” Kairos are basically what we know today as portable heat packs, often used by winter sports enthusiasts, hikers, or simply people with poor circulation in their hands, like me.

While the early stone method would have worked quite well, it would still require an external heat source. Wouldn’t it be nice if you could have a heat pack that works by itself? Such a notion led to the early 20th century invention of sealing slowly smouldering peat into portable tin cases. Stick one of these in your clothes, and you’re good for hours.

Yet the heatpack I bought today is neither peat nor stone. It’s a sealed sachet made out of air-permeable material that contains a powdery mixture of iron, water, salt, activated charcoal and a mineral called vermiculite. I ripped the packet open around 10am this morning, and many hours later it is still gently radiating warmth.

All you need for a self-heating pack like this to work is contact with air. So how do you get these “pocket flames” without burning? Of course, the answer is chemistry.

According to an article in Japan Times, this type of heat pack was accidentally invented sometime in the second half of the 20th century:1

Back in the mid-1970s, Tokyo-based Lotte, whose main business is making chewing gum, chocolates and other sweets, was working with an outside contractor to develop a more powerful oxygen absorber, using iron powder, to put in small sachets in its bags of confections to stop them going stale. By accident, water got mixed into the iron — and, lo and behold, it got warm.

The iron powder reacts with the oxygen in air, thanks to the presence of salt which acts as a catalyst, as well as water. The resulting iron oxidation (think something akin to rather fast rusting) is an exothermic reaction, which means it releases energy in the form of heat. This heat is evenly distributed through the mixture with the help of charcoal, while vermiculite prevents the heat from escaping too quickly. Once all the iron powder in the pack has oxidised, the heat finally dissipates and the pack has served its purpose.

I wonder whether mine is going to still be warm in the morning.