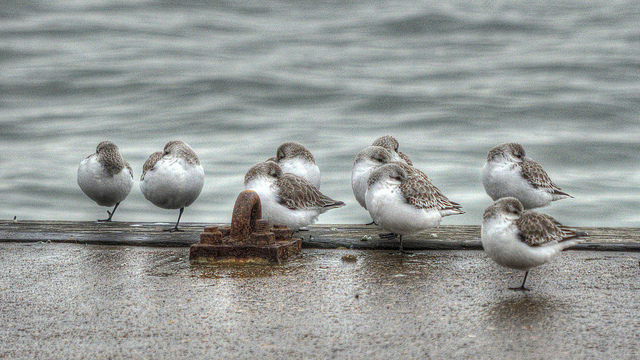 One night I was strolling through the local park after dark when I noticed something completely unexpected. Roughly two and a half metres from the ground, nestled on a hanging branch right next to the brightly-lit footpath was… a fuzzball. The snoozing critter was actually one of the members of the local noisy miner gang – all tucked in for the night. 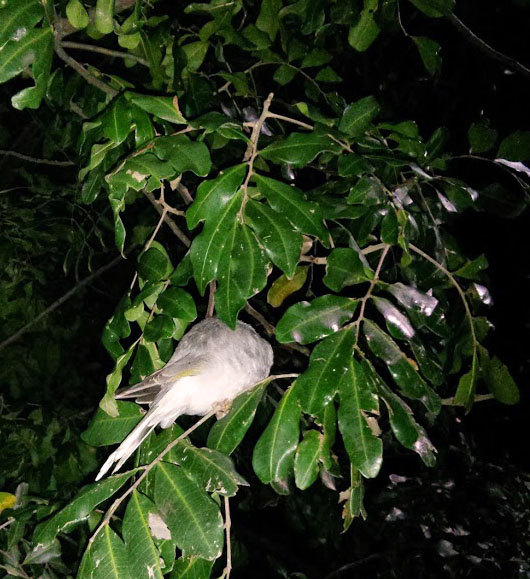 Ever since that first time I’ve been spotting them frequently now. Noisy miners tend to roost for a while in the same areas, and for some reason this bunch really doesn’t mind being perched right next to the scarce night-time pedestrian traffic. Resembling oversized cocoons, they litter the branches and are not concerned by admirers who stop and stare right underneath.

A bird, sound asleep, gripping a branch and maintaining an upright position is quite a puzzling sight. How do birds sleep and not fall off their branches? Shouldn’t they be in a nest somewhere?

For starters, if a bird even has a nest, it will not be sleeping in it after the chicks have been raised – the place is a poo-littered mess, not a cosy palace as one might think. In fact, not all birds even perch on a tree to get their snooze going; there are species that roost in tree cavities, water birds band together in groups and roost on the shore, half-awake at all times; other birds, like ducks, just sleep on the water in the middle of the pond where any splashing of a predator would be immediately noticed.

Still, more than half of all birds do belong to the order of Passeriformes, or perching birds – this means their toes are arranged in just the way to grip onto a branch (three toes forward, one back). And the answer to the ability to perch-and-roost lies with an anatomical peculiarity of perching birds.

Try reaching out and grabbing something with your hand, letting your fingers encase the object. Notice how you direct the action of your fingers to achieve a grip?

That’s not what birds do with their toes.

Their feet are actually built in such a way that once they land on a branch, they have to grip it. The reason for this is the placement of their flexor tendons, responsible for bending the toes. These interconnected tendons stretch from the muscles above the heel and pass right over it, spreading into separate toes. Thus, when the bird bends its leg upon landing on a perch, the pulley-like mechanism of the tendons makes the toes bend automatically, grasping the twig safely, securely and completely involuntarily.

The only way to release this mechanism is to stretch the legs deliberately, upon taking off. Until then the bird is safely locked to the branch and can do anything it wants, even snooze away – its toes simply can’t release the grip.