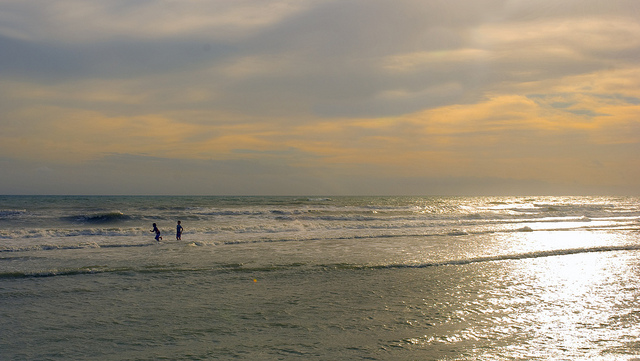 In Australia, frolicking through bodies of water in order to lower your core temperature is a national pastime, particularly in summer. And most people don’t have to think twice before going to the beach for a swim, or jumping into the pool at a friend’s place.

Water is essential to most living things, and the human organism is no exception, with its water content estimated between 55 and 78 per cent. But what if you had a reaction to this most basic of substances, and simply couldn’t bear skin contact with it?

My boyfriend knows exactly what that’s like. Since teenage years he has been experiencing an extremely rare skin condition called aquagenic pruritus (Latin for “water-induced itching”). It means that every time after direct contact with water – showering, bathing, swimming – his skin starts to itch with a thousand pin-pricks, and no amount of scratching can alleviate it; he just needs to wait until it fades away some 20-30 minutes later.

This happens every morning after he’s had a shower, no matter how swift. Every time after a swim. Itching. He doesn’t take baths, because it’s simply not worth the severe discomfort afterwards. There are no visual symptoms, no rash, welts, or swelling, so many people around him find it difficult to understand – this reaction is happening.

Aquagenic pruritus is so rare that until the 1980s it was hardly described in the medical literature. My boyfriend was diagnosed with it as a “water allergy” in the late eighties and prescribed antihistamines, which didn’t really help and just made him drowsy all the time.

Even today the mechanism for what triggers this skin reaction is not entirely clear, because it is not an allergy  in the typical sense, as in caused by excess histamine. Instead, the culprit seems to be buried somewhere between a misfire in the sympathetic nervous system and a problematic response to some neurotransmitters.

The research on aquagenic pruritus is still thin on the ground, and only a handful of studies have examined particular cases or attempted some treatments with varying luck. Overall the results on treatments are contradictory, and all the individual studies are so small and far apart, that nobody has even bothered to do a meta-review to try and conclude something useful from it all.

Usually, when faced with a medical problem and in need of a cure, one can go to a healthcare specialist who will have knowledge of the scientific literature. They will be aware of the consensus of what the best treatment is, and be able to provide you with it. But this is not the case when you enter the land of extremely rare conditions, because there simply isn’t enough data to draw a reliable conclusion on what’s causing it and say “here, take this and it will be all better.”

So you have to experiment with what you’ve got and perform DIY science at home. I stumbled upon a very small study from 1994 in which five people were treated with capsaicin cream, and all five were symptom-free by the end of the four-week course. The researchers thus theorised that substance P, which is the neurotransmitter that reacts to capsaicin, is involved in causing aquagenic pruritus.

Because all the other potential treatments, such as ultraviolet phototherapy, taking anti-depressants or neuroleptics are more invasive and expensive, we have decided to try capsaicin cream in a home experiment. Yes, this means my boyfriend now has a designated test area on his chest where capsaicin cream will be applied three times daily for four weeks. The sensations there will be compared to control areas which did not receive capsaicin, such as legs. It’s a primitive study design and it’s not even blinded, but at least we can avoid accidentally taking regression to the mean for a positive result.

Do you know anyone with aquagenic pruritus?

Update: Here’s what happened with the whole capsaicin test.