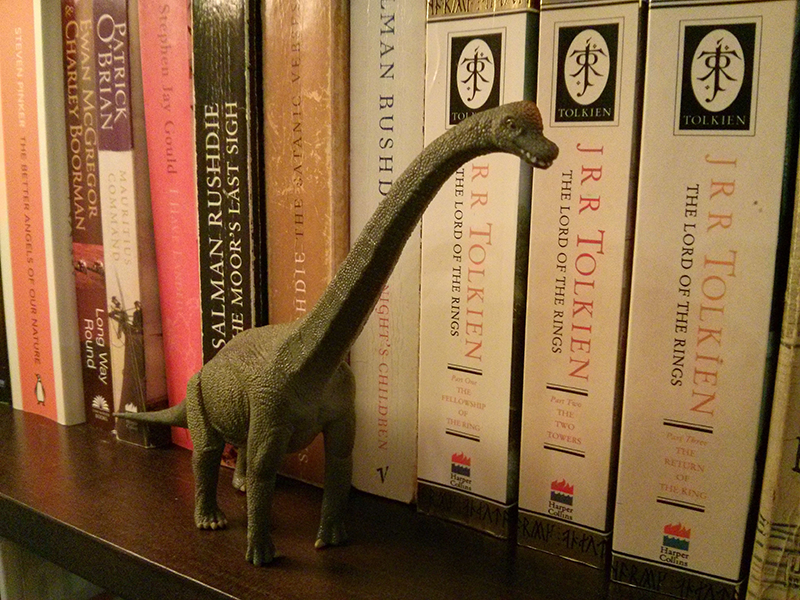 The things you can pick up for a dollar from a street-side stall on the weekend.

Such as this figurine of a Brachiosaurus altithorax, which my boyfriend affectionately named Theodore because… it has little painted buckteeth.1

This giant herbivore lived in the Late Jurassic period roughly 156-145 million years ago, and all the evidence we have for that are a few incomplete fossils from North America. It belongs to the order of Sauropods – very large herbivores. In fact, at the time of its discovery in 1903, Brachiosaurus was the largest dinosaur found. Of course, it has now been surpassed by other discoveries.

The name Brachiosaurus comes from Greek, meaning ‘arm lizard’, because its front legs were longer than the hind legs, and together with the long neck this feature likened it to a giraffe. Altithorax is from Latin and refers to the particularly deep and wide chest cavity these dinosaurs had.

Brachiosaurus had 52 chisel-like teeth for tearing off plant matter such as treetops as it grazed together with its herd.2 These lumbering creatures mainly roamed plains, because going up and down hills when you are roughly 26 metres long and weigh as much as 65 metric tons is quite an ordeal – and you can even fall over.

Even Theo, inanimate as he is, has already managed to topple from several places. Adventurous little creature.