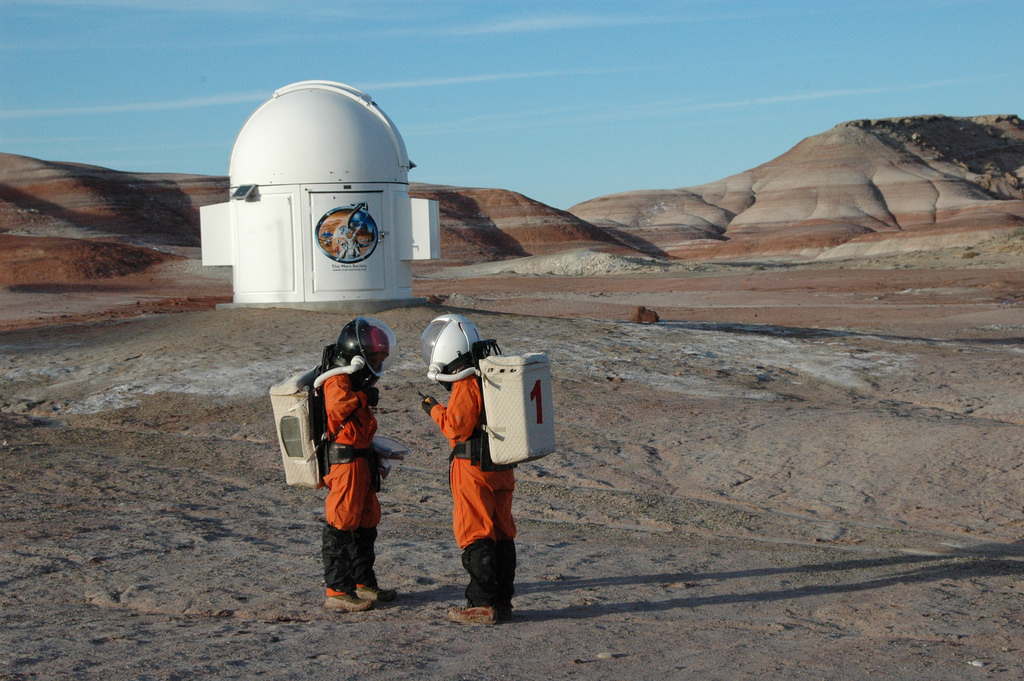 The Musk Mars Desert Observatory nearby| By lwpkommunikacio

Journalist’s Report
Hello world! Today is the first day for Crew 146 at MDRS. Our team consists of Commander Nick Orenstein, Crew Engineer Dmitry Smirnov, Health and Safety Officer Helen Antoniades, and Artist-in-Residence Elizabeth Shores. After staying overnight with team 145 and enjoying a wonderful pasta dinner, we started early this morning by taking a tour of the nearby rock formations. We then bid farewell to Crew 145 this afternoon before settling in to our quarters. [..]

It appears as difficult to travel successfully to simulated Mars as to travel to actual Mars. Originally a collection of seven international officers, Crew 146 arrived yesterday at the Mars Desert Research Station in two spacecraft as a team of four. All carried stories of travel adventures, delays, and confusions along with their cargo. [..]

These are excerpts from the first log entries of what was going to be a two-week mission at the Mars Desert Research Station (MDRS). The following day an unprecedented fire disaster terminated this mission. Had this been Mars, the crew would have perished.

Luckily the MDRS is located in the Utah desert. It’s a simulated Mars surface exploration habitat that was built by a space advocacy group called the Mars Society. The habitat has been operational since the early 2000s, and to date 149 crews have gone on two-week long missions that involve a full-fledged simulation of what a human Mars planetary mission would be like. They wear analogue space suit simulators when they step outside the circular dome, they collect rock samples, and tend to plants in the GreenHab, a cylindrical greenhouse and grey water tank attached to the main habitat.

Plant tending is precisely what the unlucky crew 146 had been doing when disaster struck. On 29 December, one day after the start of the mission, the crew noticed an unexpected power surge, and a few minutes later they spotted smoke coming out of the GreenHab. The commander and crew engineer used all fire extinguishers available at the station, but the flames, three metres high, continued to destroy the middle part of the greenhouse. After an hour’s struggle, they finally managed to put the fire out with water. By then the mission was doomed.

A later investigation showed that an electric heater had been placed too close to one of the wooden shelves in the GreenHab. In an interview with Space.com commander Orenstein admitted that the small number of the crew made it difficult to deal with the emergency – instead of the usual six or seven people, there were only four of them.

As disappointing as it must have been for the crew to can their mission after just one day, and as devastating the loss of the greenhouse is for the MDRS, lessons have been learned from this accident. For starters, no flammable materials will be used in the new greenhouse. And replacing the old structure with a new one will allow the Mars Society to implement new design ideas, such as partially burying the greenhouse to optimise its temperature controls.

No flammable shelving in the future real Mars habitat – check.