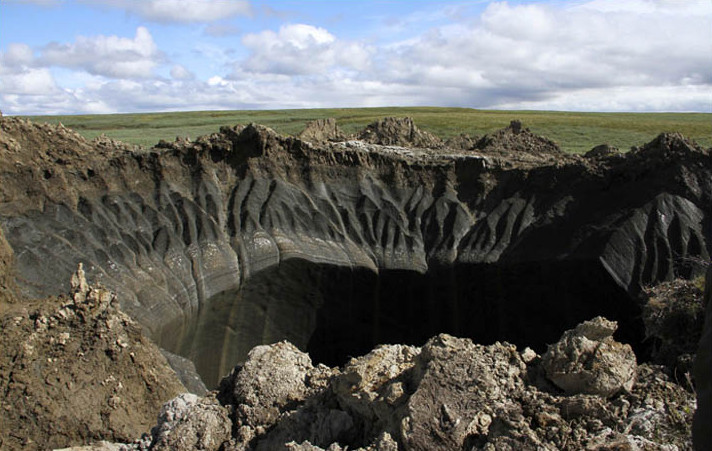 You may not know this, but there are several large “craters” or sinkholes in Siberia. The first one of these was discovered in 2013, and until February this year it was thought there were three of these. One of these pits, located on the Yamal peninsula in the Arctic, and not far from a large gas field, is almost 80 metres in diameter. In November 2014 brave scientists from the Russian Centre of Arctic Exploration lowered themselves into this hole and found it to be 16.5 metres deep.

When the world first heard about these Siberian craters, one of the most fanciful theories was meteorite impact, however that was promptly ruled out. After measurements revealed high methane levels at the bottom of the Yamal pit (dubbed B1), it was theorised that these holes were formed by gas explosions caused by a release of thawed methane hydrate – methane gas trapped in the crystalline structure of water ice, buried underground. This would be consistent with the observed scattering of smaller rocks around the hole, which suggested an explosion of some kind. The cause of the rapid thawing – why, global warming of course.

However, recently it was announced that there are actually more craters in Sibera than just three. Satellite surveys have revealed several new large ones, including one with a series of smaller holes around it. Researchers believe that there could be dozens more hiding in the Arctic regions of Siberia.

This may mean that the theory of their formation was only partially right, and the cause of these explosions might be due to the rapid melting of pingos – mounds of earth that form in permanently frozen areas, when a large amount of frozen groundwater pushes from underneath.

According to Carolyn Ruppel, chief of the U.S. Geological Survey’s Gas Hydrates Project, a rapidly melted pingo may form a crater due to the ground collapsing underneath.

Ruppel theorizes that the craters were formed by a sudden release of natural gas that had been stored in the permafrost but was kept under pressure by the weight of the pingo.

This theory is bolstered by the Russian satellite data, which show pingos—they appear as small mounds—in the exact positions where the craters later formed.

There are many more pingos across Siberia, as well as on Alaska’s North Slope, so there’s substantial risk of additional craters opening up as the planet continues to warm, Ruppel says.

So really, these mysterious Siberian craters are likely to be just another addition to the long list of observable planetary changes due to climate change. No surprises there.