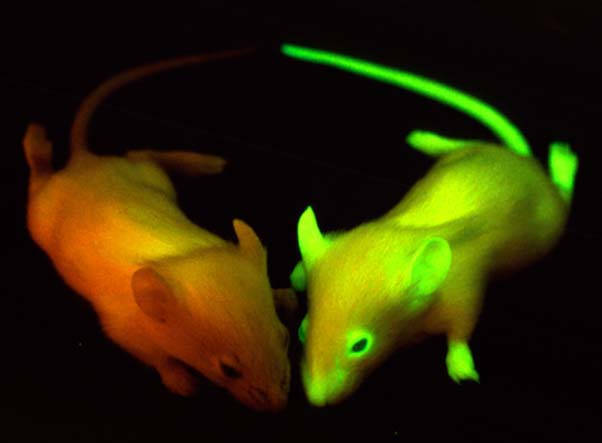 Things in the natural world sometimes glow in the dark. It’s known as bioluminescence, found in organisms from bacteria to bugs.

But things in the natural world can also fluoresce – glow when exposed to ultraviolet-range light. This happens thanks to the presence of proteins with fluorescent properties. In the early 60s a Japanese organic chemist and marine biologist Osamu Shimomura was working in his laboratory at Princeton University, studying the small but beautiful crystal jelly Aequorea victoria. He had already done some ground-breaking work in the field of bioluminescence, and was now tasked with figuring out why the outer edge of this largely transparent jellyfish glowed green when it got upset.

It took more than 10,000 jellyfish, but eventually in 1962 Shimomura and his research team isolated a protein which has now become one of the most famous substances in biological research, the green fluorescent protein (GFP). In 2008 the discovery of GFP brought Shimomura a shared Nobel prize in Chemistry, together with two other scientists whose work had significantly advanced the use of this protein in practical research.

So what is the use of having a fluorescent protein at hand? Because it is coded for by a single gene and inheritable, GFP can be used as a sort of glowing genetic ‘tag’ which can be attached to other genes the researchers are focusing on. Because genes are notoriously tricky to keep track of, and testing for individual ones can be time-consuming and extremely difficult, a simple ‘does it glow’ test is a significant game-changer.

Fluorescent proteins have other uses, too – breeding fluorescent pigs can help with the study of genetic disease, because pigs are quite genetically similar to humans; glow-in-the-dark fish make it easier to study their reaction to environmental pollution, because damage or changes in  their tissue are easier to detect in ultraviolet light; use fluorescent proteins to create mice with different-coloured neurons, and it makes it easier to have a look inside the brain. The list goes on (with images).

In short, scientists are not genetically modifying organisms for fun, just to see if they can make them glow. But it’s a cool side-effect for sure.

One thought on “Fluorescent animals | Day 211”