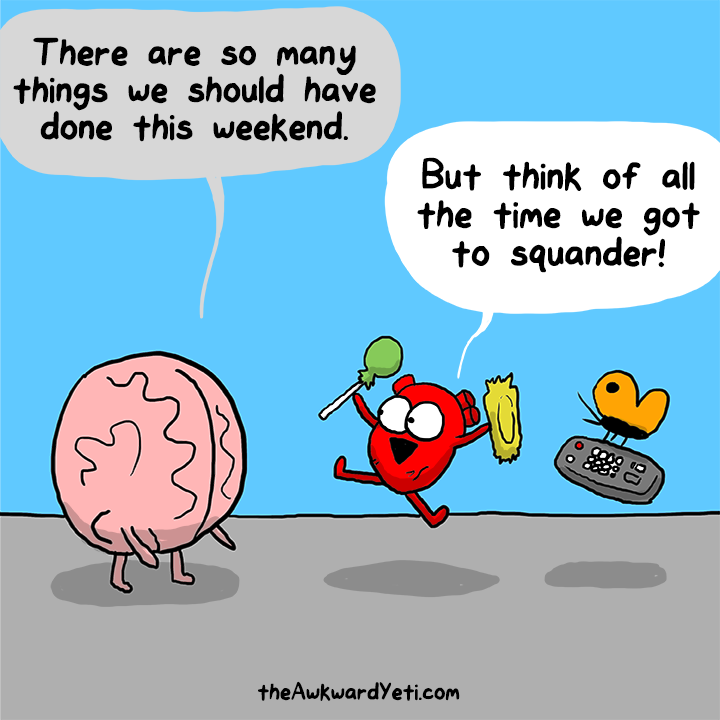 Replace "weekend" with today and you have a rather accurate description of how my day was. | Heart and Brain

“Heart and Brain” is perhaps one of my favourite web comics of all time. Created by cartoonist Nick Seluk, it is a spin-off from his original series “The Awkward Yeti.”

While not all of Nick’s work explores science, some of the comics featuring personificated human body organs are also an effective – and amusing – means of explaining diseases or bodily quirks. Nick used to do this at school to represent information from lessons – he drew cartoon doodles in his notes to help him understand and remember the concepts.

Below are some of my favourite explainer cartoons.

Blood clots are initiated by platelets, which clump together forming a plug, typically meant to stop bleeding at a site where a blood vessel is ruptured. This happens when platelets are exposed to thrombogenic (blood-clot forming) substances found in the body, or when blood does not flow properly.

The appendix (click on the comic to read better) is a tube located at the junction of the small and large intestine on the lower right of your abdomen. It’s not quite clear why we have one, but there is a theory that it houses beneficial bacteria which can re-enter the digestive system after bouts of diarrhea and similar upsets. But then it might just be an evolutionary leftover with no use whatsoever. We don’t know – but the little bugger can get infected and rupture, causing appendicitis, a life-threatening condition that requires surgery.

And here’s what may happen if you get gallstones. There is a whole series on the mishaps of little gallbladder – from how he made the gallstones from the bile and other substances that the liver wanted him to hold, to how the kidney passed some to the bladder, because gallbladder was being kicked out. Oh, and he also meets tonsils, who explain why they  were kicked out at some point.

Now go off and read all those comics for a while, even if you have to be doing something else. Your Heart and Brain will thank you.