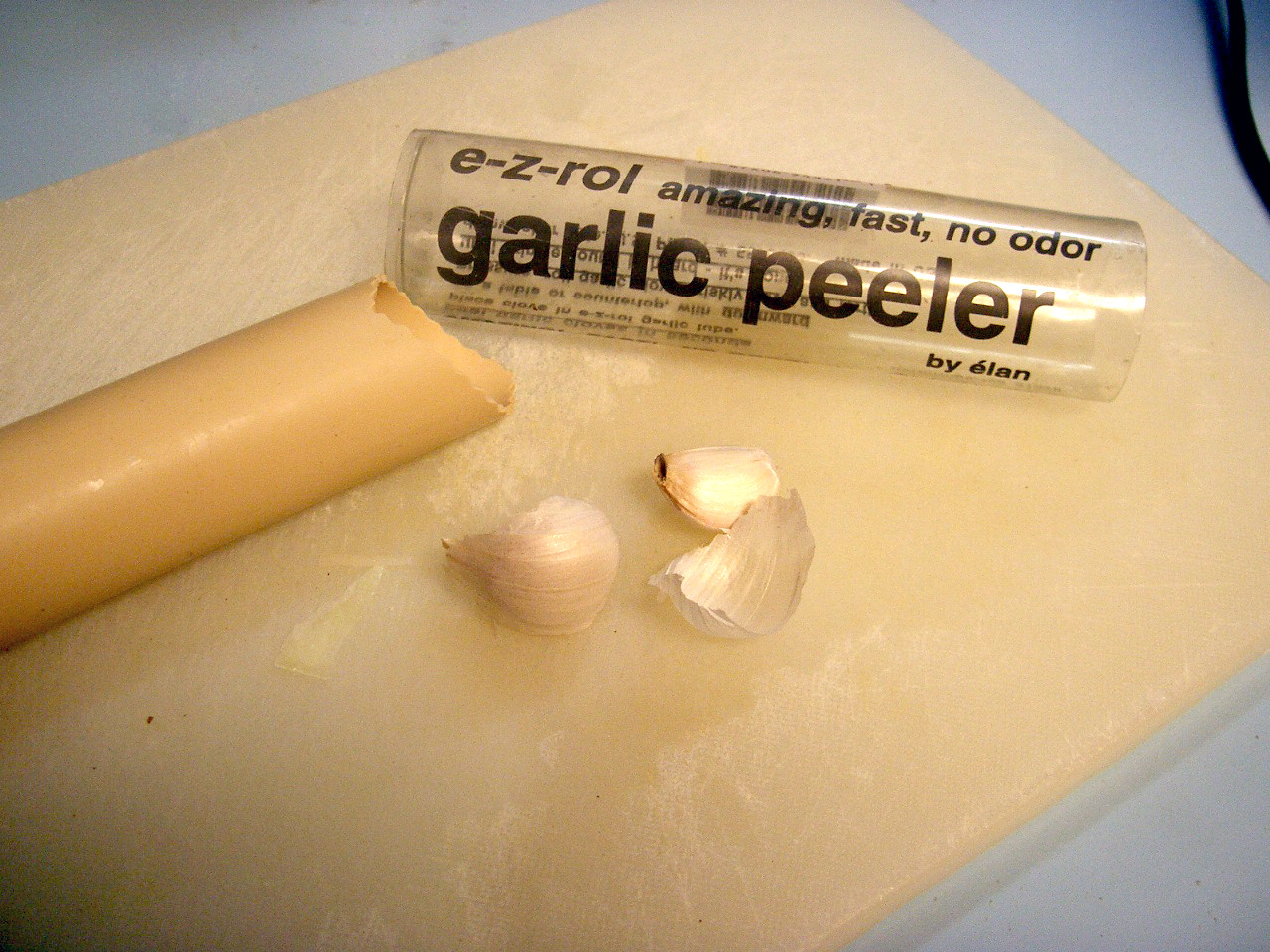 This one is the original invention; mine is a ripoff, but looks similar, albeit with a textured outside | By basykes - Attribution License

I’ve grown a bunch of tomatoes, so I decided to make a batch of sofrito today. This Spanish sauce involves a copious amount of fresh garlic – there are few kitchen jobs worse that peeling garlic, particularly when you need a whole head of it.1

However, I have a neat workaround in my kitchen, a silicone garlic peeler. It is essentially a rubbery tube that comfortably houses a clove of garlic – roll it back and forward on the counter a few times, and the garlic skin slides right off. Genius. The thing was patented in 1998, and the invention “aims to allow the skin to be removed from the individual garlic clove in a safe, speedy, hygienic and odour-free way using, if necessary, only one hand.” I peeled my 20+ cloves in mere minutes. Thank you genius person who invented it. In fact, I know exactly who that is.

The silicone garlic peeler was invented by Ben Omessi, a retired American architect who had taken to designing home items for people with disabilities. When he was recovering from a major operation in 1991, he found he was too weak to stand and peel the amounts of garlic his wife used for cooking. This lead to the idea that handicapped people would have trouble with this task, too. A few years later the E-Z-Rol garlic peeler was born.

But what exactly makes the peels fly off the garlic when rolled inside the tube? The mechanics of the action are really quite simple – it’s friction. Garlic cloves are smooth, thus the peel clings to them tightly, because there is little friction between the two. However, when an unpeeled clove is placed into a rubber tube and rolled around, the rules change. Now there is more friction between the silicone and the peel, and the molecules of the two surfaces attract with greater force than the surface of the clove can hold the peel in place.

Thus, the rubber tube wins and removes the peel from the smooth surface of the clove. The patent of the peeler even includes a mention that it is possible to have the inside of the tube have a textured surface, which would, of course, increase the friction force within.

Interestingly, a silicone garlic peeler is not the only way to go about the task. Some people swear by the impact method – you place several cloves in a jar or between two large mixing bowls, and vigorously shake. Which one is better? The folk over at Science Fare bought eight heads of garlic and performed a test. Head over to discover the results.

One thought on “The physics of peeling garlic | Day 223”