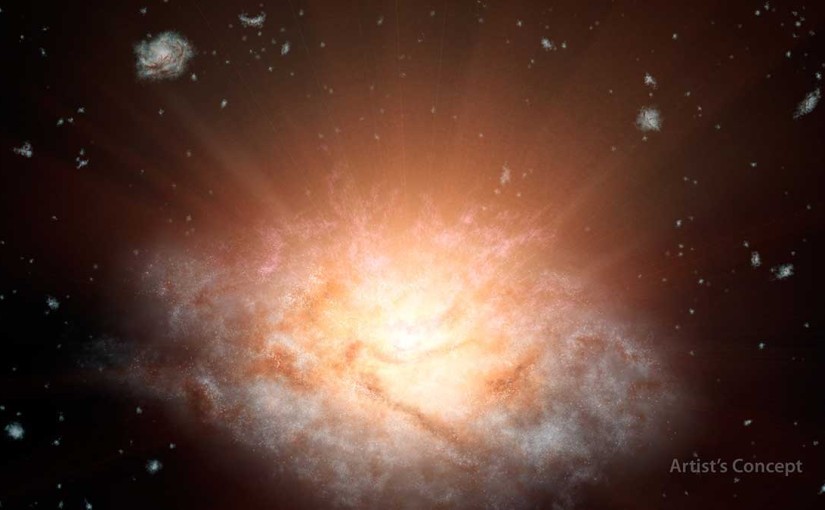 You know what, it’s Friday. I’m tired. I’m also on a rolling radio story deadline that will force me to work for a good part of the coming weekend.1

So, here’s one of them, published today on Science Alert. It’s about a supermassive black hole at the heart of a galaxy that might well be bending the theoretical limits of what we know about how black holes grow. In other words, the galaxy is just too luminous. Which means that is contains a ginormous black hole. Which is now an interesting puzzle for astronomers to solve – how did it get so big?

NASA scientists have discovered the most luminous galaxy to date

It’s bursting with the light of more than 300 trillion Suns.

NASA scientists have found the brightest-known galaxy in the Universe thanks to their hard working Wide-field Infrared Survey Explorer (WISE) space telescope.

WISE has been assisting scientists in compiling infrared images of the cosmos since 2009, and over the course of its mission, has discovered a whole new class of objects – extremely luminous infrared galaxies, otherwise known as ELIRGs. These are some of the most luminous systems in the Universe.

In a new report published this week in The Astrophysical Journal, an international team of astronomers has described 20 such ELIRGs, including one that dazzles brighter than any found before. Given the rather oblique name of WISE J224607.57-052635.0, this galaxy must have a ridiculously massive black hole in its belly, the team suggests.

… continue reading over at Science Alert