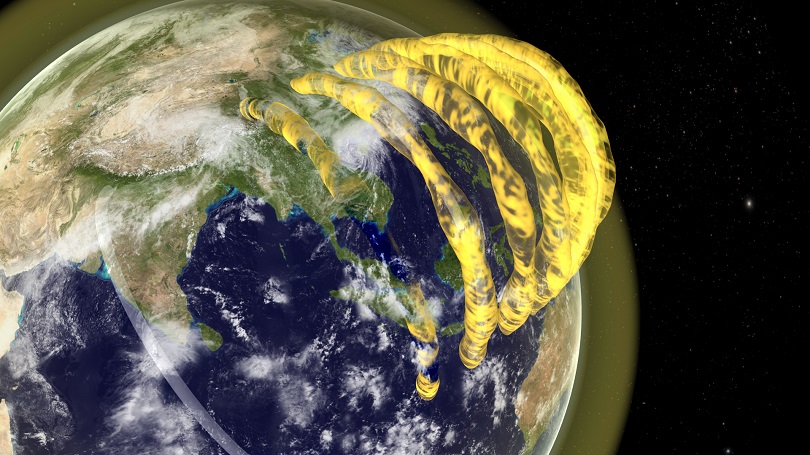 Tubular plasma structures in the inner layers of the magnetosphere. Image: CAASTRO/Mats Bjorklund from Magipics

For over 60 years astronomers believed that there are tubular plasma structures in the Earth’s magnetosphere. However, there was no visual evidence, until a young student from the University of Sydney delivered it. And she did that as part of her undergraduate thesis, while working at the ARC Centre of Excellence for All-sky Astrophysics (CAASTRO).

Cleo Loi is the lead author of an international study just published in Geophysical Research Letters. The striking pattern of plasma tubes you see in the picture above were detected thanks to her work that used the Murchison Widefield Array radio telescope in a novel manner.

“It is to Cleo’s great credit that she not only discovered this but also convinced the rest of the scientific community. As an undergraduate student with no prior background in this, that is an impressive achievement,” said Ms Loi’s supervisor Dr Tara Murphy in CAASTRO’s press release.

Watch Cleo Loi explain the finding in this YouTube video:

And here’s what she writes on her Sydney Uni student profile:

Research is a fusion of logic, creativity, resourcefulness, common sense, diligence and intuition applied to problem solving. I enjoy it because of the intellectual autonomy it allows me to exercise and the escape it provides me from more constrictive pursuits such as coursework.

Keeping in theme with Wednesdays being about science art as well – the 3D animation was done by Mats Björklund of Magipics, an Australian producer of scientific multimedia content.