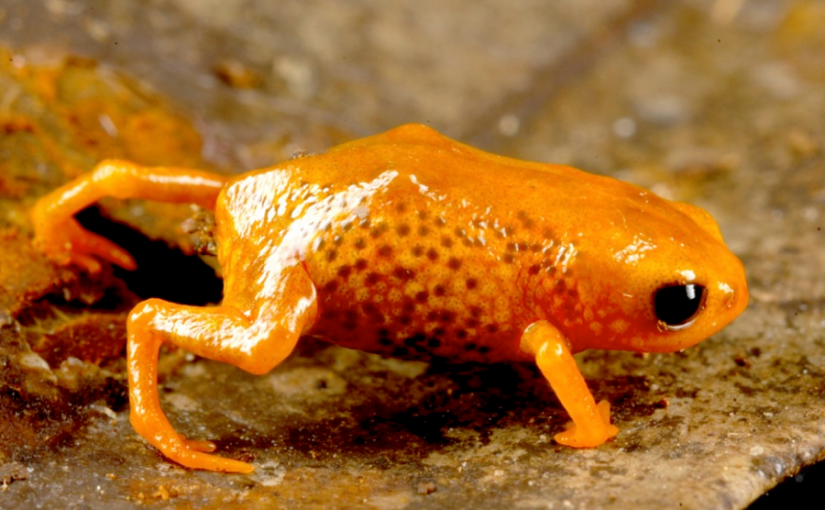 Brachycephalus leopardus, Figure 12 from the paper

Trust a rainforest to yield new, fascinating species. This time it was the Brazilian Atlantic Rainforest, and the species in question were a bunch of brightly coloured, tiny frogs.

The native habitat of these delightful little creatures is a place of persistent fog and mystique. Known as ‘cloud forests’, these parts of the tropical rainforest are characterised by a persistent or frequent cloud cover enveloping the canopy. This usually happens thanks to altitude and a few other factors, such as latitude and proximity to the sea.

A team of researchers spent almost five years exploring these mountainous cloud forests, and much of the time it must have felt like being in a very green, drippy sauna. They’ve returned with a sizeable addition to the genus of tiny frogs, Brachycephalus – seven new species were described in a fresh paper published in the open access journal PeerJ. This genus is only found in small pockets of the Atlantic Rainforest of Brazil.

These pretty unique frogs are so tiny they often don’t exceed one centimetre as adults, which places them amongst the smallest terrestrial vertebrates roaming the planet. On top of that, they are also brightly coloured.

Because of the restricted nature of their habitat, Brachycephalus frogs are not often discovered, and they don’t wander around the forest much either, preferring to stay in the little pockets of cloud forest they call home.

However, because the tiny frogs live in such highly localised habitats, it also makes them highly endangered, because cloud forests are fickle, sensitive to the slightest changes in climate. The researchers think that in order to preserve some of these species, they may need to breed them in captivity. I wonder if that means these little critters could become decorative pet frogs. They don’t look like they would eat much.