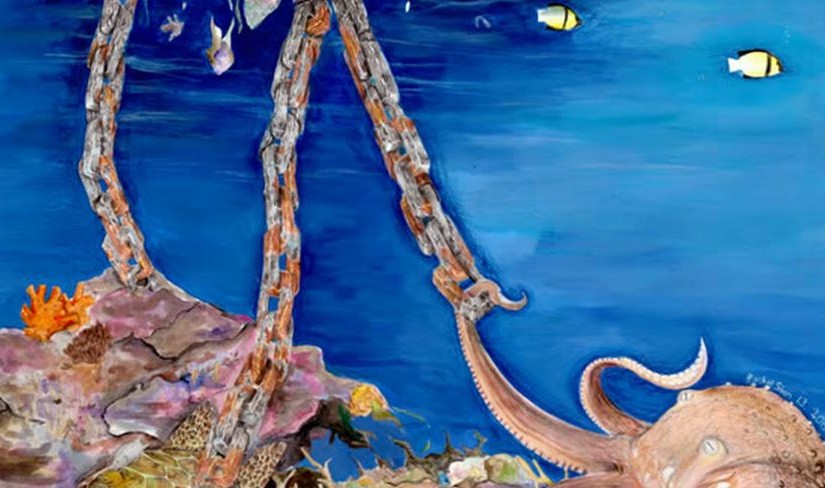 How to get schoolkids interested in marine conservation? Engage them in an activity! For example, an international drawing competition.

This is exactly what the Khaled bin Sultan Living Oceans Foundation does every year. This non-profit organisation based near Washington, D.C. does marine science, outreach, and education. To promote preservation of the world’s oceans, they not only create educational materials and conduct workshops, but also put on an annual competition:

Science without Borders® Challenge is a yearly event that engages secondary students to promote public awareness of the need to preserve, protect, and restore the world’s oceans and aquatic resources through different forms of media.

This year the theme was “Reef Relationships”. According to the foundation, coral reefs harbour nearly 25 per cent of all marine species, and many types of ecological relationships take place in this environment, including various kinds of symbiosis. Students could get thinking about this idea and express it in artwork, portraying relationships of various coral reef species, or humans and reefs. Overall, 152 pieces of artwork were submitted, and I’ve taken the liberty to share one of the winners below.

I don’t think I made art that beautiful when I was thirteen.

Middle school first place winner, Rachel Shen, attends the Beware Wet Paint Progressive Art School. When asked what inspired her to create her artwork, she said, “I am inspired by the beauty of coral reef. We took a family vacation to Hawaii. I still remember the kayak and snorkeling trip in Kane’ohe Bay during which I saw a lot of beautiful coral reefs and fish. I wish my artwork could bring people’s attention to the connections between corals and another sea animals.”Rachel will attend summer art camps where she states that, “she will be able to express her creative thinking.”

And spread the message of marine conservation, for sure.

Make sure to head over to the challenge website and admire all the other artworks, too. They’re a real inspiration, and make me want to pick up some coloured pencils.