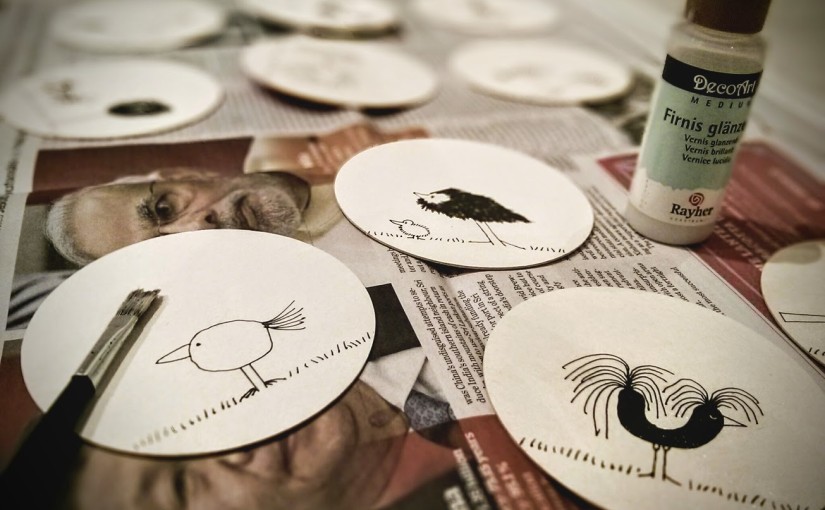 IKEA bird coasters in the process of waterproofing

I bought these cute coasters at IKEA today. They’re made from fairly thin, unglazed cardboard, and are probably meant to be more or less disposable. However, as much as I try to avoid single-use products, the adorableness of the various bird doodles won me over, and I figured I could just give them a coat of varnish myself. This would make the surface more waterproof, allowing for longer use.

By definition “waterproof” means something that water doesn’t get through, but that doesn’t tell you much about how it works at a molecular level. For example, a hydrophobic material is one that doesn’t attract water molecules, causing droplets to form at what’s known a high contact angle – in other words, the droplet doesn’t spread out.

Fatty acids are hydrophobic, too – hence water and oil don’t mix. Meanwhile, the opposite of a hydrophobic material is one that readily attracts water, a hydrophilic material. Salts are an example of this – they are highly soluble, and even attract water molecules from the surrounding air. Cardboard is also hydrophilic, because its primary constituent is cellulose, a plant-based fiber that readily absorbs water.

So, if I want my flimsy cardboard coasters to last longer, I would ideally coat them with something that repels water, or at the very least doesn’t let it through. I went for some clear varnish used in crafting, because that’s what I had at hand. Varnishes typically contain a type of oil that hardens into a film after exposure to air – this resulting film can be pretty good at keeping water molecules at bay.

What’s the most impressive material for waterproofing? It would probably be a type of super-hydrophobic coating, such as the one exhibited by that plant leaf above. Lotus leaves have nanoscopic structures on their surface which help keep them clean, as the water rolls straight off, taking any dirt particles with it. Humans have been able to replicate this kind of structure in the lab, and created superhydrophobic coatings based on silicon that you can simply spray onto stuff. However, even though it looks pretty impressive in action, the water-resistant effect comes from the surface structure created by the coating at a nanoscopic level, and as such it is easily damaged by friction. So, for keeping my coasters fresh longer, a few coats of varnish is still the best way to go.

One thought on “The chemistry of waterproofness | Day 307”