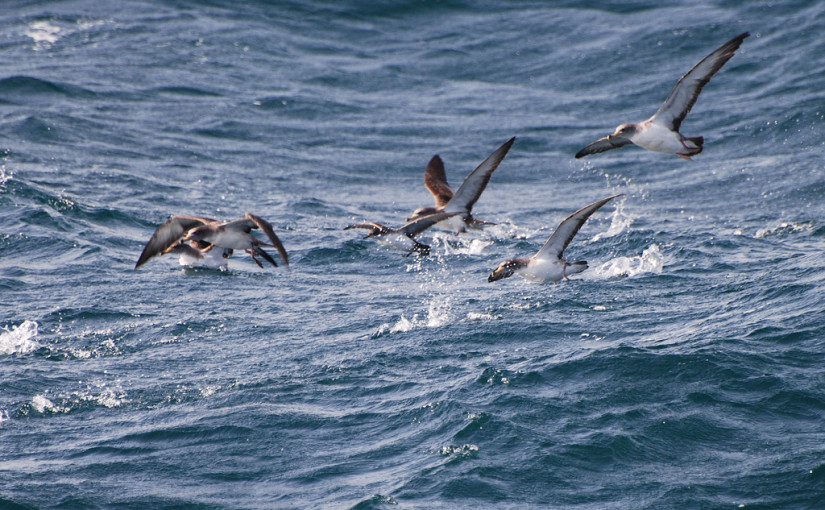 The life of a pelagic bird is nothing but endless sky and open sea, with the occasional dive for fish to feed on. Shearwaters, a family of seabird species known for their extraordinarily long life span and their ability to migrate for thousands of kilometres, see no need to come ashore unless it’s time to make babies. Cruising far out across the featureless ocean waters, these birds nevertheless know how to find the way to their breeding colonies, often located on tiny islands in the middle of nowhere. All that without a compass, too. So how do they do it?

The first hunch is usually geomagnetic clues. But researchers know that seabirds of the Procellariiformes order have a well-developed sense of smell, so they started wondering whether it is somehow involved in their navigational ability. In 2010 and 2011 a team of scientists displaced a total of 24 Cory’s shearwaters (Calonectris borealis) from their nesting grounds, manipulated their senses, and tracked whether the birds would find their way back over a span of 800 kilometres. Eight birds had their nostrils washed with a zinc sulphate solution which temporarily rendered them unable to smell, eight other birds had magnets attached to their heads, and eight birds were left as controls. The only group that had trouble getting back to their colony island were the birds who had lost their sense of smell.

To provide evidence that birds rely on olfactory maps to traverse oceans, researchers would need to do more than confuse eight birds. But such invasive approaches are no good when it comes to obtaining a large sample size in a population of sometimes endangered birds, so scientists needed to come up with a different method to figure this out. An international team of European scientists recently managed to do just that, and published their research yesterday in The Royal Society Proceedings B. The team GPS-tagged over 200 shearwaters from three species and seven colonies, and gathered data on their flight patterns. The information of whether birds flew straight or kept changing course was compared with a mathematical model of what their flight patterns would look like if the birds were following a patchwork map of smells coming from various directions across the water, taking into account atmospheric turbulence.

“When the odours are continually present above the threshold of detection, then the ‘odour map’ is present and the birds will maintain nearly unidirectional flight,” the team writes in their paper. “But when the odour concentration falls below this level, the birds are without their map and so effectively lost. They may change course either because they become disoriented or because they are attempting to re-establish contact with the odour map.”

The figure below shows a sketch of what this would look like. The data from GPS loggers confirmed that shearwater flying patterns indeed correspond to what one would expect if the birds were flying by smell, as opposed to a random ‘searching’ pattern or some other unknown factor.

Because shearwaters are long-lived bird species, the researchers propose that they learn the smell maps over time, and hence are able to locate their foraging and breeding grounds by quite literally following their noses. Furthermore, the team even suggests that if birds navigate by smell, this might be what other bird species use for migration, too. Because we are used to think of birds as navigational geniuses with built-in compasses, at least to me this news comes as quite a surprise.

One thought on “Sniffing seabirds | Day 318”