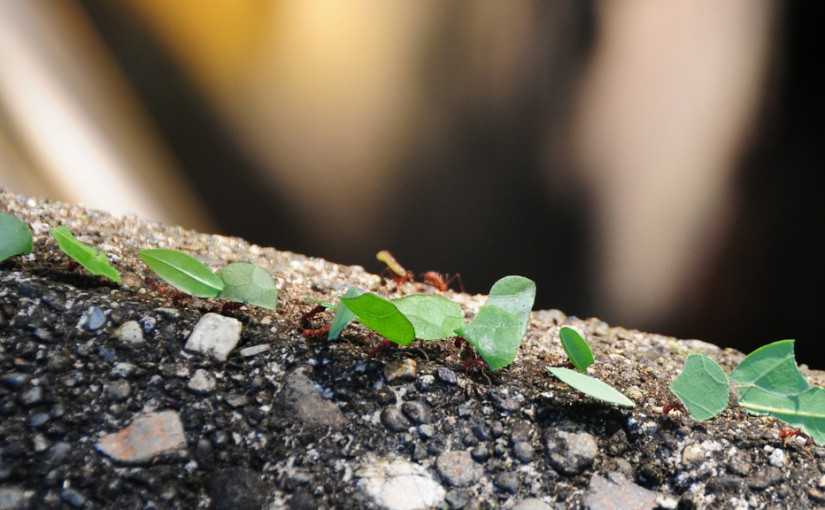 You know those days when nothing seems to be going right, and you’re not feeling well, and there’s still so much work left to do, but it’s already the end of the workday and blergh.

I’m having one of those, and it’s most certainly not conducive to writing, so I decided to share some videos instead. To make it more interesting, these are not just any videos. They are videos about ants. (If you are scared of ants, I’m really sorry. Best not read on.)

How to explore big scientific mysteries? One way is to go small. Deep Look is an ultra-HD video series created by KQED public media outlet in San Francisco. This four minute piece is about leafcutter ants, and it explains why we can think of them as farmers – contrary to what you might think, they don’t eat the leaves they harvest. Instead, the ants use these pieces to pad out their nests and grow food on them. You will also learn what agriculture has done to the societal structure of leafcutter ants. I must admit that for some strange reason I was quite unnerved by the end of it. Maybe because it turns out that ants are the dominant biomass on the planet.

BBC Earth has a whole show called Ant Attack. They’ve shared an excerpt video in which ants take down a grasshopper. The ants featured in this show are African driver ants, members of a large army ant genus, whose colonies can reach the size of more than 20 million individual members. The following material is not for the squeamish, although you will learn about different types of ants working together.

You won’t learn anything from this one. I’m just sharing this French cartoon to make you feel better after watching the previous two videos. A bunch of enterprising, highly organised ants work to retrieve a bounty of sugar cubes. It’s not gruesome at all, although not without drama, either.