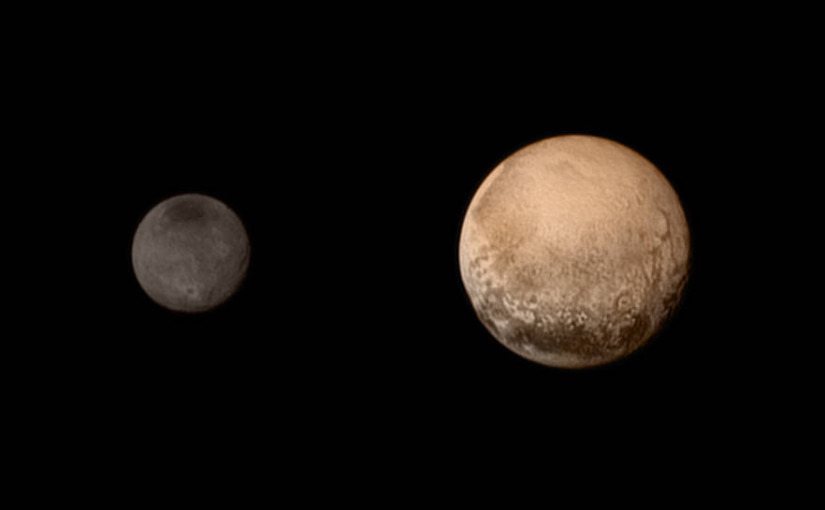 As I write this, NASA’s New Horizons probe, the one that doesn’t have an inscription typo on board, the same one making space exploration history this year, is as close to Pluto as any man-made thing has ever been. Incremental photographic glimpses of Pluto have been trickling in a steady stream through science news outlets for weeks now, but right now, this is it.

Today, at approximately 7:49 am EDT time (21:49 here in Sydney), New Horizons will pass Pluto at only 12,500 kilometres from the surface. That’s only a couple minutes from now! There has been a galore of interesting space stories over the past years, what with the comet chasing, Mars Rover and so on. But this is truly one for the history books – since 1962, when we had the first successful planetary flyby past Venus, spacecraft have been journeying out, catching glimpses of planet after planet, moon after moon. But it wasn’t until today that we had a clear look at Pluto, the “king of the Kuiper belt”. Heck, we didn’t even know how big it was, and the data gathered by the New Horizons probe is almost certain to bring more surprises.

Right after the closest point of the flyby, at 8:00 a press conference will start. You can watch it live on NASA’s website.

Meanwhile, here are some NASA scientists reacting to pictures of Pluto.

And here’s one for the history books.

SNEAK PEEK of gorgeous Pluto! The dwarf planet has sent a love note back to Earth via our New Horizons spacecraft, which has traveled more than 9 years and 3+ billion miles. This is the last and most detailed image of Pluto sent to Earth before the moment of closest approach – 7:49 a.m. EDT today. This same image will be released and discussed at 8 a.m. EDT today. Watch our briefing live on NASA Television at: http://www.nasa.gov/nasatv The high res pic will be posted on the web at: http://www.nasa.gov. This stunning image of the dwarf planet was captured from New Horizons at about 4 p.m. EDT on July 13, about 16 hours before the moment of closest approach. The spacecraft was 476,000 miles (766,000 kilometers) from the surface. Image Credit: NASA #nasa #pluto #plutoflyby #newhorizons #solarsystem #nasabeyond #science