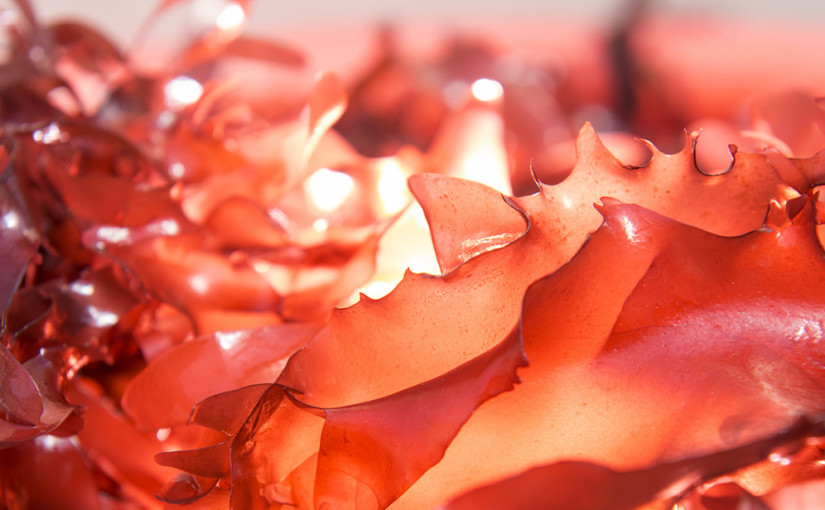 What’s red, chewy, and comes from the sea? Yes, it’s algae, but not just any algae.

Dulse, or Palmaria palmata, is a type of red algae found in Atlantic Europe, although it’s also common along the Atlantic coast of Northern America. In western Ireland it’s referred to as dillisk, and is eaten dried, as a snack. High in protein, it also contains a range of trace elements, minerals and vitamins, all beneficial for human health – hence in dried form it can be found in some health food stores, or as a food additive. Meanwhile in Iceland they’ve been putting this stuff in dishes for centuries – the reported flavour benefits are similar to those you would get from other natural MSG sources, such as certain seaweeds used in Japanese cuisine.

If it’s so great, you’d think it would be more widespread – however, as with most algae-related stuff, the majority of people who don’t live in particular coastal areas don’t really think of seaweed as a beneficial part of the diet, and most certainly not a major ingredient.

But now I’m thinking that chances are dulse might soon be gracing your plate at the local trendy café, or indeed be available at all major supermarkets. In fact, it might become the new kale, or even surpass it.

Because marine scientists at Oregon State University (OSU) have managed to make dulse taste like bacon.

They were originally trying to create a commercial food source for abalone farming, and thus developed a new strain of dulse for this very purpose, one that actually increased abalone growth-rates to an unprecedented scale. But when a colleague from OSU’s College of Business stopped by in search for potential business projects, he suggested to test dulse’s potential as a “specialty crop” for human consumption. Before long, in a truly interdisciplinary effort, a research chef from OSU’s Food Innovation Centre was brought on board to develop new uses for dulse.

Amongst putting it in salad dressing and cooking it into chips, they fried the red leaves on a pan, only to discover that the new strain tastes much like bacon. Bacon that grows super-fast in simple water tanks, and you don’t have to kill anybody to eat it.

To curb your excitement I do have to add that nobody else outside the research group has tasted it yet, so let’s hope they weren’t exaggerating, and the OSU-developed dulse strain really is “a strong bacon flavour”. If it is, I’m sure this is not the last you’re hearing about this.