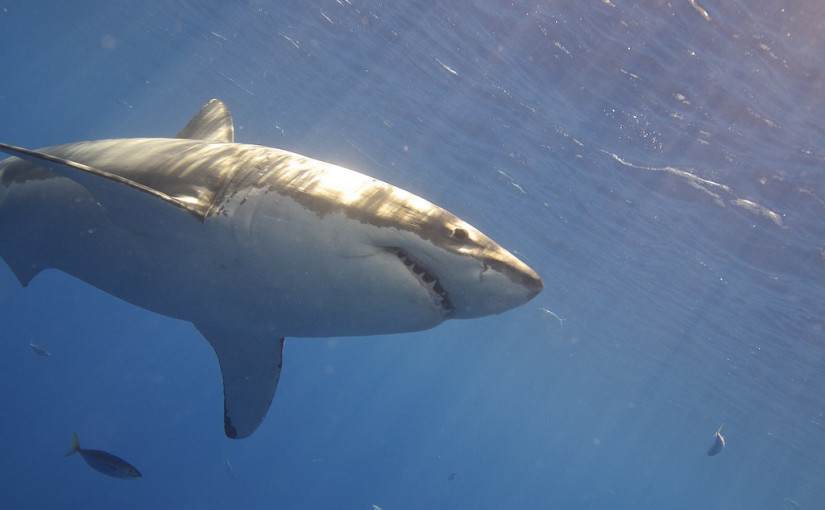 Today, a shark off the South African coast got kicked in the nose pretty hard – surfing world champion, Australian Mick Fanning had a run-in with the animal while competing in the J-Bay Open final, and got away live and unscathed, if somewhat rattled from the experience. The incredible footage of him wrestling the shark in the water was captured on live television, and spread through social media like wildfire. It’s a dramatic story with a wonderfully happy ending, but it was harrowing for everyone involved – after all, shark fatalities, albeit rare, are very much real.

Which brings me to the point that nearly everyone has been referring to this as a ‘shark attack’ – a term that some scientists actively reject.

Journalists: don't use the inflammatory and inaccurate phrase "Shark attack" at all, definitely not when there is NO HUMAN INJURY AT ALL.

In fact, a couple years ago the American Elasmobranch Society issued a resolution to two media style guides that asked for retiring the phrase ‘shark attack’ altogether, calling instead to use four phrases which “cover the full range of [shark-human] interactions”. The classification goes as follows:

Shark sightings: When sharks are seen close to people but cause no injury.

Shark encounters: When sharks make contact with surfboards, kayaks and boats but cause no injury.

The society claimed that such wording focuses on the outcome instead of the intent of the shark – many shark researchers argue that calling all encounters ‘attacks’ is overblown, and contributes to the stigmatisation of these creatures which play a valuable role in the ocean. Sure, they kill people sometimes, but those are usually freak events – and scientists believe the backlash is often disproportionate.

On the one hand, I agree with the sentiment – humans love to panic and blow things out of proportion, ending up with campaigns that call for mass shark killings and other ludicrous occurrences. What happened to Mike Fanning was not much more than an encounter – a terrifying, life-changing encounter, but it’s true that he wasn’t necessarily attacked.

On the other hand, though, I also think it’s over the top to say that when a shark kills a person, or leaves them alive but without several limbs, that we should be politically correct towards sharks and call these events ‘shark bites’. After all, when a dog mauls someone’s face off, one doesn’t go around calling that a ‘dog bite’ – because it’s much more than that, and the suffering involved is often immeasurable.

This is also the opinion of shark expert George Burgess: “I believe there are shark attacks and shark bites and the role of science is not to legislate words,” he told Cox Newspapers in 2013. “If a bullshark mauls somebody, that’s an attack and you can call it an attack. But if you have your toes nipped while surfing, that’s a bite.”

That seems much more sensible to me. Where do you stand on shark attacks – should the phrase be done away with, or just used with more caution?