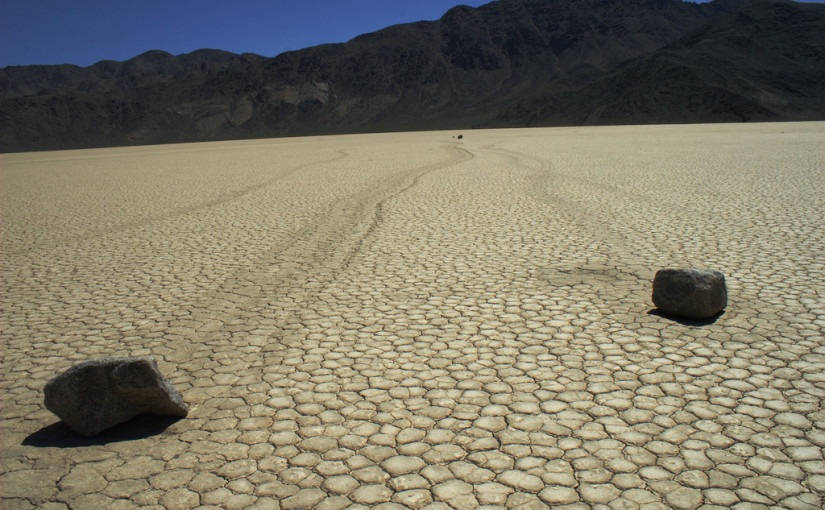 Trying to catch sailing stones in action is as riveting as waiting for paint to dry. The stones in question are found on Racetrack playa1 in Death Valley, US. This exceptionally flat dry lake has been known since the early 1900s to harbour ‘racetracks’ etched into its face by large rocks, but no one was sure how the rocks were moving, and hadn’t seen them do so – until last year.

There were hypotheses, of course. “Proposed explanations run the gamut from natural to paranormal to alien,” skeptic Brian Dunning wrote back in 2007. “Strange magnetic forces, psychic energy, alien spacecraft, teenage pranksters, and even transdimensional vortices have all been proposed. The leading scientific hypothesis is that the rocks are moved by high winds, on rare occasions when the playa is wet enough to be extremely slippery, and conditions are just right.” If you read Dunning’s account of his own visit to Racetrack Playa, you’ll see he actually came up with a hypothesis that proved correct.

The key to solving this fascinating geological puzzle was published in PLOS One last August, complete with a timelapse video. It turns out a sailing rock needs a rare confluence of events to take place – rain, ice, sun, and a light breeze.

It may be confusing to think of water in a dry lake, but it helps to know a playa is not always completely dry – Racetrack experiences a rainy season in both summer and winter, although only parts of it will flood in any given year. But when they do and the temperature is low enough, the water will freeze, forming thin ice sheets. When the ice is thin enough to leave rocks exposed, but thick enough to stay sturdy, the sun is warm enough to melt the ice a little during the day, and a light wind of 3-5 metres per second drives the ice across the surface of the lake bed, you might just have yourself a sailing stone gliding along, too.

The stones move at an almost glacial pace, if you like – hence nobody had spotted them in action until a team of scientists ran a nice experiment with some test rocks. It took several years, and they called it “the most boring experiment ever”, but at least we now know that aliens had nothing to do with it. You should watch the video below to find out exactly how they did it – there’s great footage and images included.