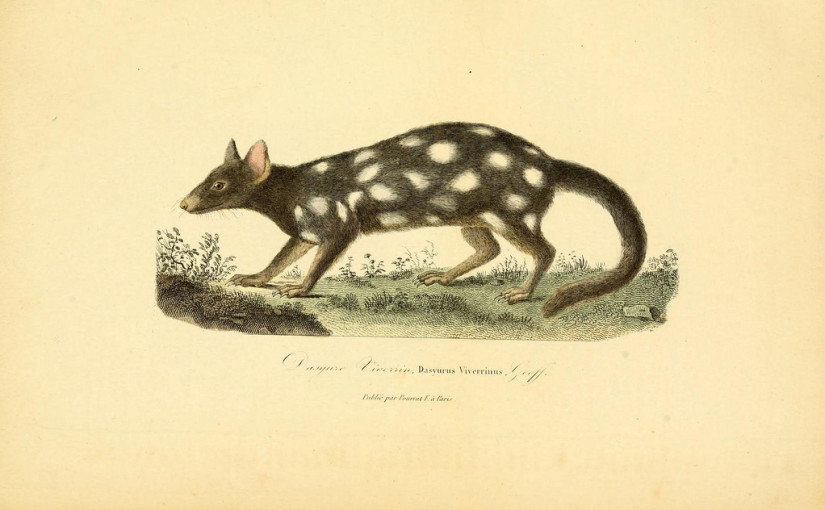 If Australia has anything like a native cat, this little polka dot animal comes closest. It’s called a quoll, and there are four species of this carnivorous marsupial. Albeit they are the largest carnivorous marsupial on the mainland, all of them have suffered habitat loss due to urbanisation. The Eastern quoll (Dasyurus viverrinus) even went extinct on the mainland continent, while remaining fairly abundant in Tasmania.

Quolls on average are about the size of a small house cat or a very large squirrel, and are solitary nocturnal predators, so it’s no wonder they have also been called ‘native cats’, although the look is more of a huge fuzzy mouse with a pointy snout and sharp claws. Even their diet is similar to cat diets – insects, small mammals, birds, and reptiles. The Eastern quoll also sports a distinctive white-spotted coat. If the fur colour is black, this leads to a striking polka dot appearance which I find irresistible.

Right now the Eastern quoll is actually the star of a little bit of good news about conservation – there are plans to release 40 of these creatures on mainland Australia next year. Their new home would be a pocket of New South Wales that is clear from foxes and feral cats, two invasive species wreaking havoc on the native ecosystem. This pocket, Booderee National Park in Jervis Bay, is the closest environment to where quolls lived on the mainland before it got too tough. Reintroducing a bunch might spell good news for the ecosystem of the park, and perhaps even be the first step on the road to restoring Eastern quolls to their previous range.

However, ecosystems are a curious thing, and even previously native animals have been found to affect the system differently once they come back. Still, I will certainly be rooting for the little polka dots.

Bonus: To watch some Eastern quolls in action, head over to this video on Australian Geographic.