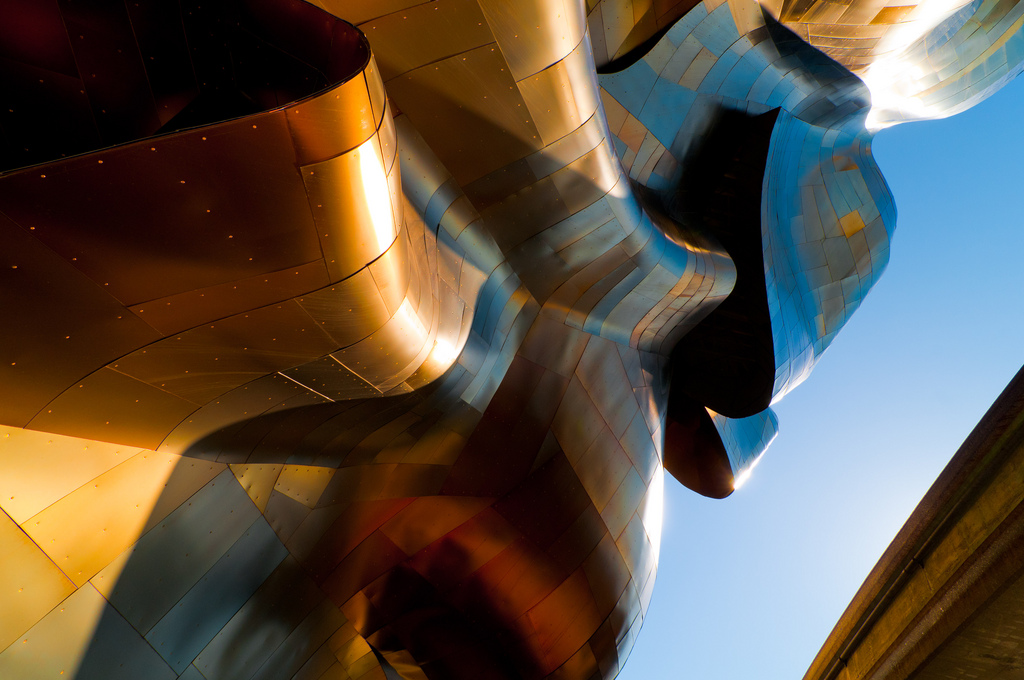 Fragment of the Science Fiction Museum in Seattle | By Alex Bartok - CC BY-NC-SA 2.0

I have basically neglected this blog today – partially due to a small bout of something I can only describe as “writer’s block,” but more notably because I’ve spent every free moment reading this year’s most significant sci-fi novel, Ancillary Justice by Ann Leckie.

This novel is this year’s winner of three most prestigious awards in literary science fiction: the Arthur C. Clarke award, the Hugo award and the Nebula. That is a rare feat, and more surprising yet – this is Ann Leckie’s first novel. And it is really, really good. While it does fall within the range of what one might describe as a ‘space opera’, it tells the story in a refreshing way, and employs some exciting and unique literary devices. And I’m only a third of the way through! Unfortunately this post is not going to be a review of the book, because 1) I haven’t finished it yet; 2) Are book reviews something that would fit on this blog? Maybe you can let me know.

So here instead are three reasons why I absolutely love the sci-fi genre, particularly in literature.

As humans who live in the age of explosive, rapid technological and scientific advancement, we are attracted to the kind of technology that, for all we know, might be just around the corner. Fusion energy devices, faster-than-light space travel, mind-boggling AI capabilities, settlement on other planets, cryogenics – all of that and more can be brought into reality by a good sci-fi story, so instead of fantasising what it might be like, we basically get a slice of living with this kind of technology.

A vehicle for philosophy

Academic philosophy has always concerned itself with Big Questions, such as free will, consciousness, right and wrong, cultural and moral relativism, and many others. However, all of these fundamental issues are often difficult to translate into literature in a way that wouldn’t be either dreadfully boring or so shielded in an ivory tower that a non-initiated person simply can’t follow the argument. Science fiction, with its freedom of manipulating space, time and reality, can offer scenarios where fundamental philosophical problems come to life. It’s not literature, but my favourite example when pointing this out is the TV series Star Trek: The Next Generation. No other show is so infused with philosophy, and that makes it incredibly rich.

Sci-fi, in no small part thanks to the previous two aspects I’ve already mentioned, can explore issues by turning them from hypothetical scenarios into a (literary) reality. What if there was a civilisation that set out to conquer the whole galaxy – what would their political, religious and cultural system be like? Or what if an empty hull of an ancient alien ship entered the Solar System, and humans set out to explore it? What if we settled on Mars and terraformed it? How about depleting the natural resources of our planet, or co-existing with sentient robots who have become a part of our society? Fantastical scenarios can often provide a reflection on the here and now, life as we treasure and it and the kind of future we might want to have.

Now, if you’ll excuse me, I need to get back to my book.