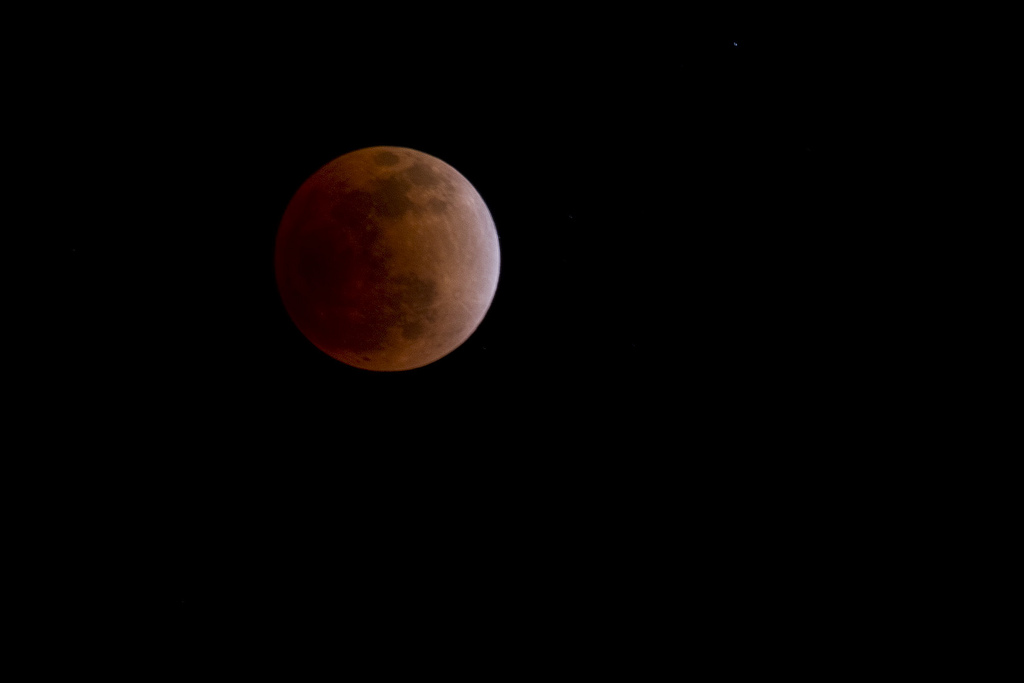 Many people in Australia and elsewhere have been gazing at the sky tonight, trying to catch a glimpse of the second total lunar eclipse occurring in the current lunar tetrad – a not-so-common succession of four total lunar eclipses.

Funny enough, even though lunar eclipses occur at least twice a year, I cannot recall ever observing a total one. In my conscious, self-aware lifetime, according to this handy eclipse explorer, there would have been at least nine total lunar eclipses visible from my Latvian hometown, Riga. I guess they were all either in the middle of the night when I wasn’t game to stay up, or the weather was crap.

Tonight the viewing conditions in Sydney weren’t ideal either, but I did catch a glimpse of the red thing as the clouds briefly parted. Excitement!

I imagine we are fascinated by eclipses for a variety of reasons – after all, the solar and lunar cycles have been present in human mythology since it began. We just like to stare at the sky, don’t we. And ever for the less esoterically inclined, such as myself, the chance to observe a natural phenomenon with cosmic implications adds just a little bit of thrill to everyday life.

In case you were wondering about the moon appearing red during a total lunar eclipse rather than going completely invisible – that’s because the ring of sunlight that is not blocked out by the Earth still reflects off the surface of the Moon. Here’s a full explanation:

Sunlight is composed of a range of frequencies. As sunlight passes through our atmosphere, the green to violet portion of the light spectrum is, essentially, filtered out. This same effect, by the way, is what makes our sky blue during the day. Meanwhile, the reddish portion of the spectrum is least affected.

What’s more, when this reddish light first entered the atmosphere, it was bent (refracted) toward the Earth’s surface. It’s bent again when it exits on the other side of Earth. This double bending sends the reddish light onto the moon during a total lunar eclipse.

Now we wait for the next one in April and hope there will be fewer clouds.