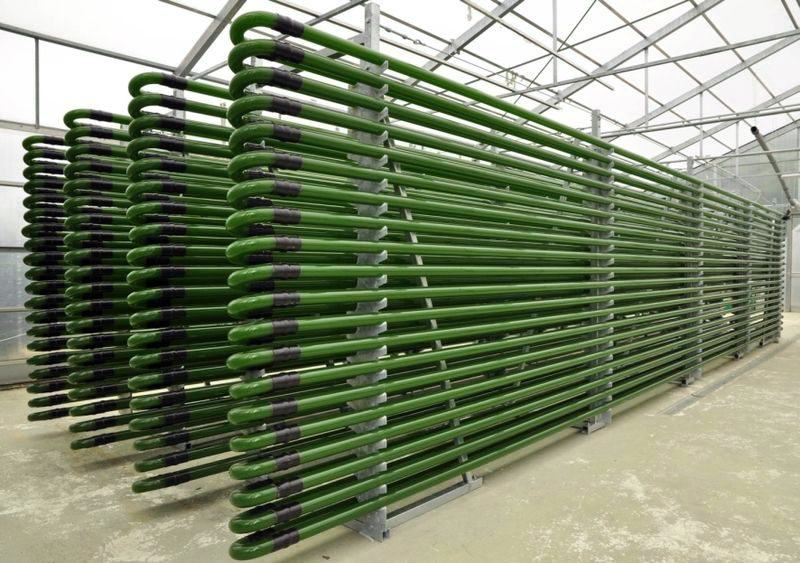 A tubular glass photobioreactor for the cultivation of microalgae and other photosynthetic organisms. | By IGV Biotech - CC-BY-SA-3.0 - via Wikimedia Commons

By some measures, right now things on Earth are pretty appalling. The number of displaced persons is the largest since World War II, obesity continues to plague the developed nations, political deadlock over climate policy means we are edging closer to a point of irreversible change, while fossil fuels and other unsustainable sources of energy still rule the market.

I often ponder about the future, and how humans might fix some of the problems that have emerged in this increasingly populated, complex, and global environment. It’s true that we are currently facing some pretty dire issues, but it’s also true that for quite a while we have been on a path of progress. And once an issue is identified, there are also solutions for it, as long as humanity is willing to commit.

Take the ozone hole, for example. Some forty years ago we realised we’ve depleted the ultraviolet radiation filtering layer of the Earth’s atmosphere, particularly above Antarctica. But now it seems the hole might finally be shrinking – because we all stopped using the kinds of chemicals that started the depletion in the first place. Global efforts can make a change, if we live long enough into the future to eventuate it.

One of these hopefully positive future trends will have to be a move towards production of energy that doesn’t cost the environment in ways fossil fuels and other conventional sources do today. All kinds of solutions are already out there, such as solar batteries, wind power, and others.

Biofuel is one of these approaches – it involves using a plant or biomass source of some kind for creating fuel that, instead of releasing carbon that has been stored in marshes for millions of years, releases only carbon recently captured in plant matter via photosynthesis.

Currently one of the most successful biofuel technologies is based on algae. They are a huge group of highly diverse organisms, although we commonly think of algae as different kinds of seaweed. But a significant part of the algae group involves microalgae, which are the main source for biofuel production research. They reproduce and grow incredibly fast, need relatively little space to do so, can grow in wastewater and purify it in the process, and feed on high amounts of carbon dioxide while growing, too. To top it all off, algae yield huge amounts of fuel per acre, and don’t need agricultural land to do so.

Of course, no one solution is going to solve the energy crisis, and it is likely to be a combination of fossil fuel alternatives that will eventually do the trick. But one reason I like paying attention to algae is that there are other excellent uses for it as well. While algae is not all glorious, because some species do produce toxins that can be harmful to human health, there is a lot of good that algae can offer to humanity.

Algae extracts have a use in biotechnology for medical purposes, such as drug delivery and biologically compatible medical dressings. In food, algae are already known to contain a vast range of beneficial micro- and macronutrients, including omega-3 fatty acids that humans mostly get from seafood (guess where fish get those fatty acids from). Algae is also used for filtering water, thus controlling environmental pollution from fertilizer in farm runoff, as well as treating sewage. If you build an algae farm in the right spot, such as a highway overpass, it can help fight air pollution, too.

When I want to be excited about the future, I remember things like algae – things that will help avert the dire crises that we are on the cusp of facing today.