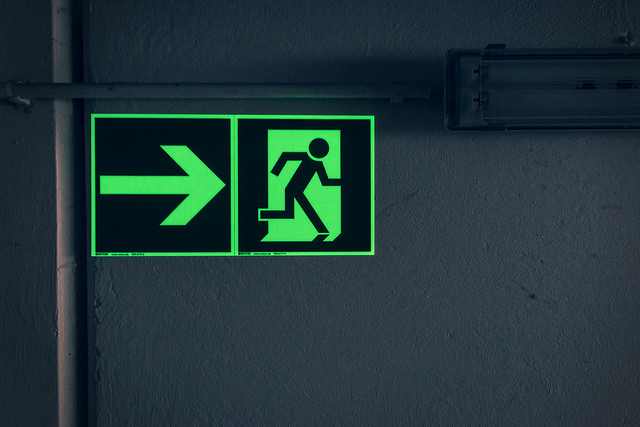 It’s been 80 years since physicist Marie Curie died from anemia brought on by excessive exposure the radioactivity. Even though these days we know better than to carry around vials of radium, there are still radioactive materials present in everyday objects.

For example, if you’re in a crowded movie theatre and there is a power failure, you’ll still find your way to the exit courtesy of the glowing green emergency exit signs. But it turns out those signs are not powered by something as benign or mundane as long-life batteries. They radiate that yellow-green glow thanks to an effect known as radioluminescence.

Inside such an emergency exit sign there are sealed glass tubes filled with a gas called tritium, a radioactive isotope of hydrogen. These tubes are coated in a phosphor – chemical substance (often based on zinc sulfide) that emits light in the right circumstances. While slowly decaying, tritium emits low-energy beta radiation in the form of electrons that excite the phosphor lining and cause it to fluoresce with a low, steady light. Sometimes the same principle is also used on watch faces and dials, particularly in a military setting where visibility is crucial at all times.

However, this doesn’t mean that exit signs are secretly poisoning us. The radiation given off by tritium is so faint that it can easily be blocked with a sheet of paper, and it definitely can’t get past our skin, or even clothing for that matter. So, as long as the tubes inside an exit sign stay intact, there is nothing to worry about. If a sign does get smashed, however, just don’t whiff the gas or try to eat any of the tritium, and you should be fine.

Meanwhile, if you ever encounter radioluminescent paint that uses radium, do stay away. That stuff causes cancer. Luckily, we know that now, so that stuff is also banned. Thanks, Marie Curie.