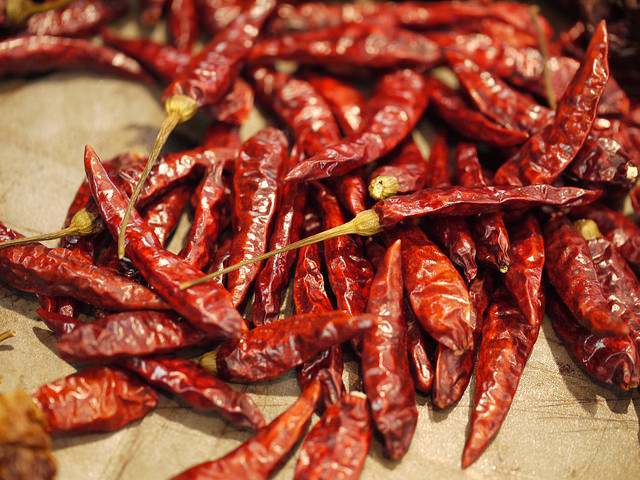 I have a friend with a chilli pepper addiction. Red, green, big, small – she crunches on them like apples, whole, and eats at least three every day. If not, she gets withdrawal symptoms. It’s a badass party trick, but the one thing I keep wondering about is how she still has any stomach lining left.

Turns out I’ve been making assumptions based on a misconception about capsaicin, the active ingredient in all hot peppers. Just like Szechuan pepper contains molecules that cause sensations in the mouth, capsaicin creates the burning feeling via a chemical interaction.

When the human body detects pain due to a tissue injury, part of the signalling system includes the release of a neuropeptide called ‘substance P’. When capsaicin touches the tongue, it activates certain pain- and heat-sensing neurons that in turn release this substance. Hence one gets a feeling of burning and pain.

Apart from the sensation, though, there is no physical damage to the tissue. Not only does capsaicin not cause stomach ulcers, but it may even help alleviate the pain of minor indigestion. This is due to the fact that if you regularly trick your body into releasing substance P when there’s no injury, it may deplete in the areas exposed to capsaicin. And when substance P is depleted in the stomach, you feel less pain. Which makes me think that people who eat chilli every day would also not feel being stabbed in the tongue.1

Still, the substance P depletion is only part of the story. People like my strange friend, who scoff down hot chillies for fun are to some degree desensitized to the heat, albeit not entirely. So it may be that they have learned to enjoy not only the burn, and the soothing endorphin rush that follows, but also the pepper flavour that’s probably hidden somewhere behind all that pain.