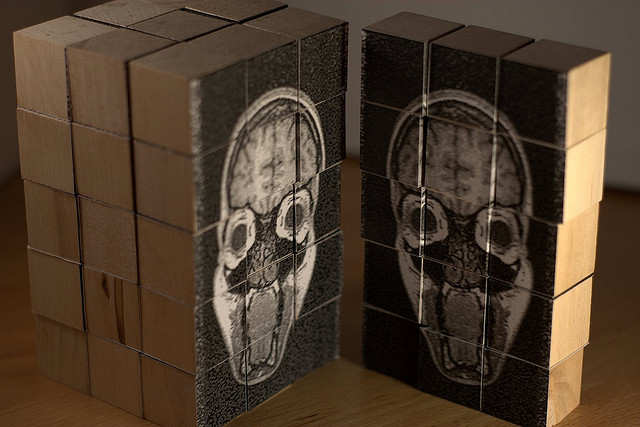 The human brain is the most complex machinery we’ve ever encountered, and it is notoriously difficult to research. One can’t just crack open the skull of someone and peer inside to look at their thoughts and feelings. Obviously.

Even though we can’t witness the brain doing its work in the same way we can see the heart beating during an open-chest surgery, it is possible to glean the workings of the mind with the use of a really strong electromagnet and radio waves.

This technology is known as functional magnetic resonance imaging (fMRI). When a part of the brain is activated, which means it is in use, the blood flow to this area increases. As part of their activity neurons require oxygen, which is delivered to them via blood – an fMRI can show the difference in blood oxygen levels, and thus determine where activity in the brain is happening. These areas ‘light up’ on the brain scan.

Since its inception in the 1990s, fMRI has become a highly popular method for brain imaging, because it’s non-invasive and doesn’t involve any kind of radiation. Because they can be used to show which parts of the brain are involved in a certain mental process, fMRI studies are a favourite amongst psychologists.

However, the more popular a research technique is, the easier to fall down the trap of using it in a manner that’s trivial, misleading, or downright unhelpful. A poorly designed brain imaging study is useless, but the flashy technology might still give it an air of importance – particularly amongst non-specialists.

As a result the media is flooded with stories of the “your brain on X” ilk. The sexy technology is showing us everything – from emotions to sex to reward mechanisms. It is used to tease out relationships with smartphones, gender differences, food dislikes and more.

Of course, a lot of that is too good to be true, too simplified, or too hyped. Hence a team of specialists decided to put together a guide that helps wrap one’s head around fMRI studies in an informed and appropriately skeptical way, without being distracted by the flashy neuro-talk. Why do certain parts of the brain “light up”? Is it relevant? How many people were studied?

These and other questions are of great importance when you’re reading a study, writing about one, or even when you just want to understand the latest neuroscience news article in the paper. The guide is written in plain language, and you can find it on the blog of cognitive neuroscientist Jon Simons.