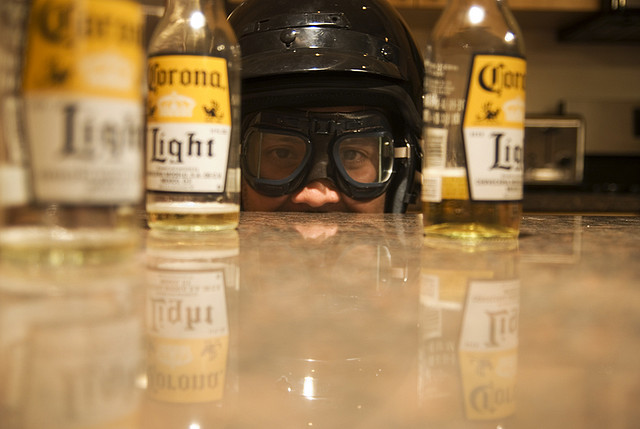 Sit a woman next to a bottle of beer and the man chatting to her will immediately find her more sexually available, no drinking involved. How’s that for some serious beer goggles?

This is the finding from a new psychology study done by researchers at Deakin University in Australia. It is well known that alcohol, being the social lubricant that it is, often features in settings where people trade sexual cues in order to procure an encounter. Unfortunately, that also involves situations where unwanted sexual advances occur, especially from men.

“We know from previous studies that people who drink alcohol are perceived to be more sexually available than those who abstain, and that men see women who are drinking as more likely to consent to sex,” explained the lead researcher of the study, psychologist Eric Koukounas.

The team decided to establish whether the mere presence of alcohol might influence the way men interpret women’s intentions. In order to do that, they recruited 147 people (69 men, 78 women) and asked them to watch a 1-minute long silent video of an interaction between a seated man and woman. The catch? They were randomly assigned to watch one of two videos. Everything about the segments was the same, except for one variable – next to the seated woman was either a bottle of water, or a beer.

The woman didn’t actually consume either drink during the video, and from the position of the bottle it was impossible to tell whether she may have done so. After watching the video segment, participants had to fill out several questionnaires, and rate the woman’s ‘sexual intent’ based on three combined parameters – seductiveness, promiscuity and flirtatiousness.

The results showed that when a man watched the video, the presence of the beer made it more likely he would perceive the woman’s sexual intent as being greater. So yes, they got beer goggles without drinking.

The researchers speculated in the paper that men might be using cues from the social environment to determine whether a potential mate is available, because these days sex isn’t all about making babies, but also simply about recreation. They noted that ads might play a role in this association of booze and women’s promiscuousness as well.

“That the mere imagery of alcohol in a social context can influence sexual beliefs toward women points to a need to explore whether many of the strategies used by media and advertising organisations are in fact perpetuating conditions in which men misperceive integral cues and whether this leads to potential sexual violence,” said study co-author Peter Miller.

Because the study, published in Drug and Alcohol Review, was relatively small, and involved young adults aged 24 years on average, there are limitations to how far we can take this conclusion. However, the team did note that a better understanding of the role of alcohol in social situations would help inform our knowledge on the relation between alcohol and sexual assault.