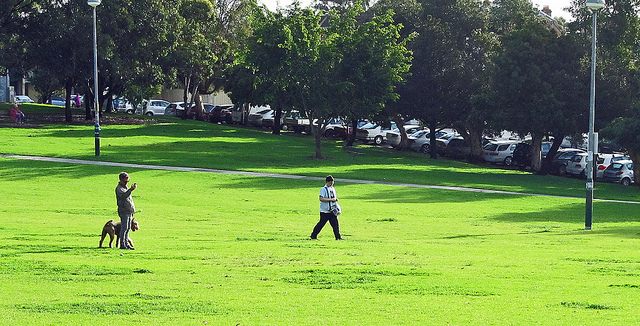 Nearby park. These people don't suspect a thing. | By Newtown Graffiti - CC BY 2.0

A really mean gang lives in my neighbourhood. Wherever they go, they make a hell of a racket. Every day, they roam the park and the nearby streets, badmouthing and bullying anyone they meet. Whenever they see a trespasser who they suspect is from a different gang, they signal each other, and then chase the poor guy off, brandishing their weapons at him. You couldn’t tell by their looks, but these guys are all tough and belligerent, and only care for their own group.

The buggers might appear all fuzzy adorable, but just wait until they open their little beaks. They are loud, and they are relentless. Just today I saw them mobbing a cat who was so terrified it seemed to be scampering for its dear life, ducking under parked cars, and clumsily scaling fences as it tried to escape the ruthless scolding and potential pecking. I’ve seen the same happen to many a raven and crow – birds much larger in size and stature to the cheeky little miners.

Noisy miners do indeed live in gangs, although the biological term is ‘colonies’. Each male bird occupies an ‘activity space’ that overlaps the activity spaces of other males. This overlap thus forms a ‘coterie’ of about 10 to 25 individuals. If there is an intruder to be mobbed, nearby noisy miners form instant flocks known as coalitions.

Even though small animals are generally thought to be weaker than large species, and less able to compete for resources, noisy miners are just one of the many species bucking the trend. Being small and incredibly aggressive can be a valid adaptive technique. Evolutionary research has shown that bird species can overcome the disadvantage of being small by evolving traits that help them get the upper wing in a confrontation with a bigger bird. Such traits include enhanced flight manoeuvrability, fancy fighting techniques, as well as muscle development amongst others.

I usually feel sympathy for the birds and animals that noisy miners gang up on, but I also admire the little guys for their brave spirit. Now, if only their babies weren’t making such a racket in my front yard.