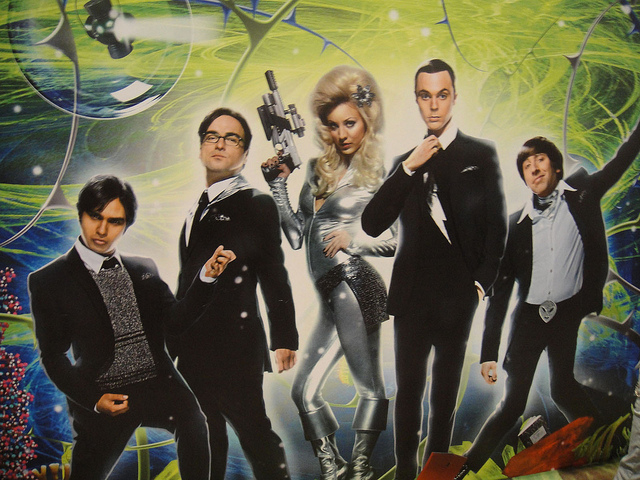 Our whole universe was in a hot dense state,
Then nearly fourteen billion years ago expansion started —Wait…
The Earth began to cool;
The autotrophs began to drool;
Neanderthals developed tools;
We built a wall (we built the pyramids).
Math, science, history, unraveling the mystery,
That all started with a Big Bang!

If you’ve ever watched American nerd sitcom The Big Bang Theory, you’re familiar with the theme song1 from the opening credits.

I wanted to do something different today – so here is an unpacking of each of the scientific phenomena mentioned in the verse as heard on the intro of the TV show. What does it mean, when did it happen, and did it happen at all?

Everything we’ve ever known, and everything beyond that – the galaxies, the stars, the planets, and the matter in between – was once packed into an infinitely dense and infinitely hot, infinitesimally small singularity. The known laws of physics can’t describe it. However, because the universe is expanding, and growing ever colder, if we wind back the tape, this singularity is what we can extrapolate to.  It is from the “Big Bang” expansion of that singularity that the universe really begins.

The Earth began to cool

Nine billion years after the Big Bang, our Solar System began to form after a fragment of a massive molecular cloud collapsed on itself, forming a giant rotating disk with the beginnings of our Sun in the centre, and a scattering of interstellar stuff around it. That stuff eventually turned into planets and the other clutter in the system. The early Earth 4.54 billion years ago was a molten radioactive ball of elements, but after all the denser metals sunk to the core of the planet, it gained its layered structure and cooled down sufficiently to form a solid crust and even keep water on the surface.

The term autotroph refers to an organism that produces complex compounds from simple substances, such as carbon dioxide. Plants and algae are an excellent example of autotrophy – they use energy from light to produce sugars from carbon dioxide and water.  The first autotrophs on  Earth were single-cell organisms resembling prokaryotes. They emerged in the primordial soup approximately 3.8 billion years ago. I’m not sure what drooling has to do with this, though. Any animal that has a mouth and can drool would actually be a heterotroph – an organism that needs complex organic substances for nutrition. Such are all animals, protozoans, fungi, and most bacteria, too. But hey, it rhymes!

Tomorrow – did Neanderthals really develop tools? When did we build a wall? And what’s special about these pyramids?