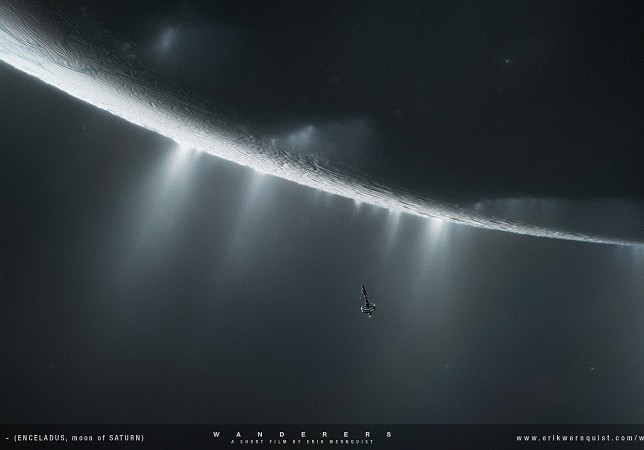 A still from the film Wanderers by Erik Wernquist

For the past ten days I have taken my own spin on end-of-year lists, nominating largely science news items in different and often unusual categories. It’s been fun.

I wanted to end the year on something inspirational and touching. And because it is the end of the year, you probably don’t want to read much right now, lest it distract you from New Year’s Eve celebrations.

But if you spare three minutes and 30 seconds, I guarantee this will be one of the most beautiful things you can witness on the last day of 2014.1

Wanderers is a short film by Erik Wernquist, a Swedish digital artist and animator. He draws a lot of inspiration from such science fiction greats as Arthur C. Clarke and Kim Stanley Robinson, as well as from numerous painters and other artists. For this particular project he was also inspired by Carl Sagan.

The scenes depicted in this film were created by using real photos and data about the locations in our Solar System. It is as scientifically plausible as it is moving.

The film is a vision of our humanity’s future expansion into the Solar System. [..] In ancient greek, the planets visible in the sky were collectively called “aster planetes” which means “wandering star”. It also refers to ourselves; for hundreds of thousands of years – the wanderers of the Earth. In time I hope we take that leap off the ground and permanently become wanderers of the sky. Wanderers among the wanderers.

Best of all, the narrative is by Carl Sagan himself.

Enjoy (preferably in full screen) – and see you in 2015, a year closer to the day when we may become wanderers of the sky.

To learn about the background of this film, visit the incredible gallery on Erik’s website.