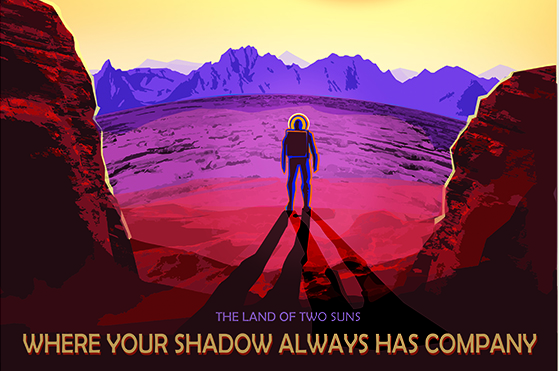 Detail from Kepler-16b poster | By NASA/JPL-Caltech

Exoplanet exploration program is perhaps one of the most exciting projects that NASA Jet Propulsion Laboratory has been undertaking lately. It involves exploring planets which orbit stars somewhere else in the galaxy rather than in our own solar system.

They have dubbed this quest “a search for another Earth” – because for humans the ultimate discovery would be that of an exoplanet similar to our own. Gleaning signs of life on such a planet might even yield a definitive answer to the question about life thriving somewhere else in the galaxy.

Of the nearly 1,800 exoplanets confirmed, NASA recently chose three to highlight as particularly interesting ones. In the spirit of retro science fiction, they even designed advertising posters that let you imagine what travelling to these places would feel like.

Where the Grass is Always Redder on the Other Side

Kepler-186f is the first Earth-size planet discovered in the potentially ‘habitable zone’ around another star, where liquid water could exist on the planet’s surface.

Where your shadow always has company

Like Luke Skywalker’s planet “Tatooine” in Star Wars, Kepler-16b orbits a pair of stars. Depicted here as a terrestrial planet, Kepler-16b might also be a gas giant like Saturn.

Experience the Gravity of a Super Earth

Twice as big in volume as the Earth, HD 40307g straddles the line between “Super-Earth” and “mini-Neptune” and scientists aren’t sure if it has a rocky surface or one that’s buried beneath thick layers of gas and ice.