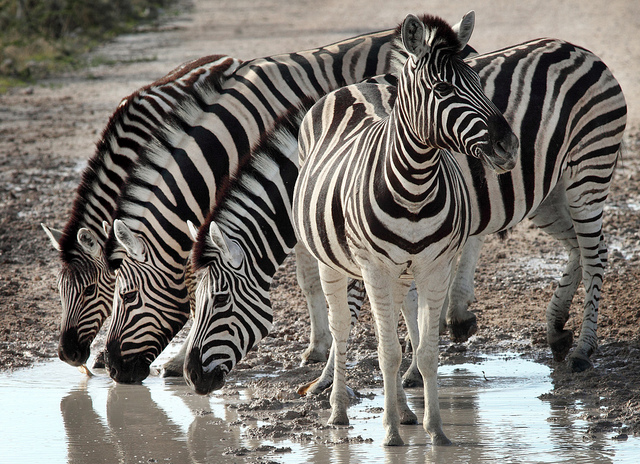 Zebras sport some of the most interesting patterns in the mammal world, but are they black with white stripes, or white with black stripes? And how would you go about finding that out?

Even though to the untrained eye they all seem extremely similar, there are actually three species of these dizzying horses: plains zebras; Grevy’s zebras; and mountain zebras. And each of these have a slightly different stripe pattern, with plains zebras having wider stripes and Grevy’s having really narrow ones.

The cells responsible for producing pigment in the coat of the zebra are called melanocytes. These cells are active in the black areas, while in the white parts of the zebra’s coat these cells are not doing much. This pattern of cells is known as selective pigmentation, and develops genetically in zebras while they are still tiny zebra embryos.

The width of these stripes is determined in embryonic stages as well; the earlier the genetic pattern develops on the embryo, the wider the stripes as the animal grows and the skin stretches.

As for whether they’re black with white stripes or the other way around, it depends on how the coat starts out. Even though most zebras have white bellies, and therefore the black stripes appear to be painted onto the white background, actually all zebra embryos start out black, and over time the melanocytes in the white areas shut off, leading to the characteristic stripy pattern.

Another reason to believe that zebras are black to begin with is the fact that most of the zebra species also sport black skin underneath the stripy coat. This makes evolutionary sense, given the scorching sun of the African plains where these animals evolved. Just as melatonin in the human skin protects it from excessive sun radiation, the pigment on the skin of other animals protects them, too.

But why couldn’t zebras just stay black, then? I’ll explore that tomorrow.