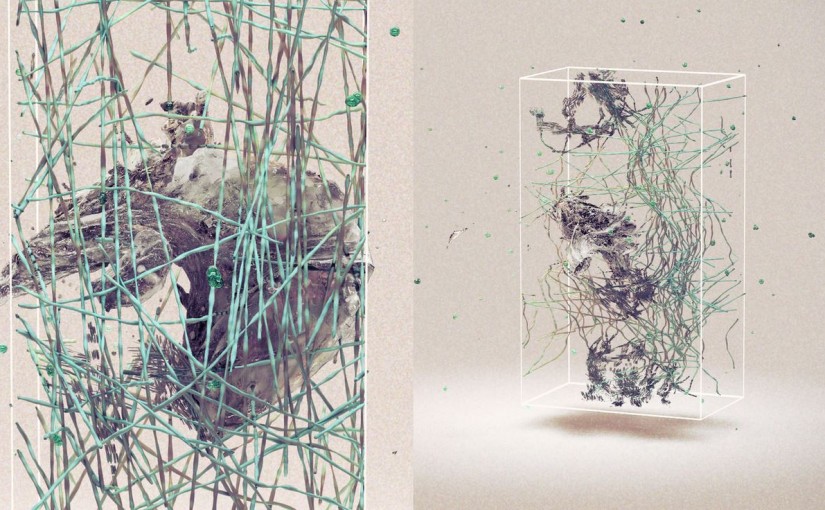 Markos Kay is a British digital artist. He’s also a creative director, and illustrator, and he teaches at a university.

According to Markos’ online biography, he is best known for his artificial life video art experiment “aDiatomea” (2007). But the work I’m featuring are his recent images commissioned by the Howard Hughes Medical Institute for their feature on Nobel prize laureate Eric Betzig’s ground-breaking work in lattice light-sheet microscopy.

I asked Markos a few questions about this work over email, and he humoured me with lovely answers, which I’ve slightly edited below.

SC: After you were commissioned, where did you look for inspiration for how the illustrations would look? What was this process like?

MK: The main inspiration was the actual recordings of cellular processes using lattice light-sheet microscopy by the Betzig Lab at the HHMI. The detail in form and movement that this technique provides is exceptional, and only that is an endless source of inspiration. Of course the technique has its limitations as it does not record images like a conventional camera; it scans its subjects in a tomographic manner and then stitches all the layers together to create an image. So my task was to reimagine how these cells look like in a more conceptual manner using scientific theory.

For example, we all know that cells are mostly made out of water, and the Betzig lab recordings show us their fluid movement, so one visual interpretation was to present a cell as a transparent fluid object. Another source of inspiration was different microscopy techniques and the visual language and forms that they reveal.

SC: What tools did you use to create the pieces? Was there are lot of experimentation?

MK: I used 3D simulation software to create the piece. Experimentation was really at the core of this project – my approach was to create virtual experiments simulating the biological processes that the Betzig Lab recorded.

Creating simulations involves setting initial parameters and creating an environment with physical laws and then letting the simulation play out by itself. This leads to unexpected and often beautiful results that almost have a life of their own. I based my experiments on three specific recordings from the Betzig Lab out of which still images were extracted and then selected by the HHMI for their cover and feature illustrations.

SC: Why does science inspire you to create art?

MK: I often get asked that question and I could write an entire book on the relationship between science and art and why it is such a fascinating subject!

On a personal level, though, for me science has an existentialist quality – it aims to answer questions about how the world works but more importantly it creates more questions about reality. It deconstructs and reconstructs knowledge and it uncovers beauty, complexity and simplicity just like art.

That existentialist aspect resonates with me as an artist and it provides endless material for inspiration.

I’ve only shared two here, but you should view the whole album over at Markos’s Flickr. I find the pictures thoroughly captivating. Go look at them all!

He’s also released a film and illustrations on his website, as well as on Sedition.