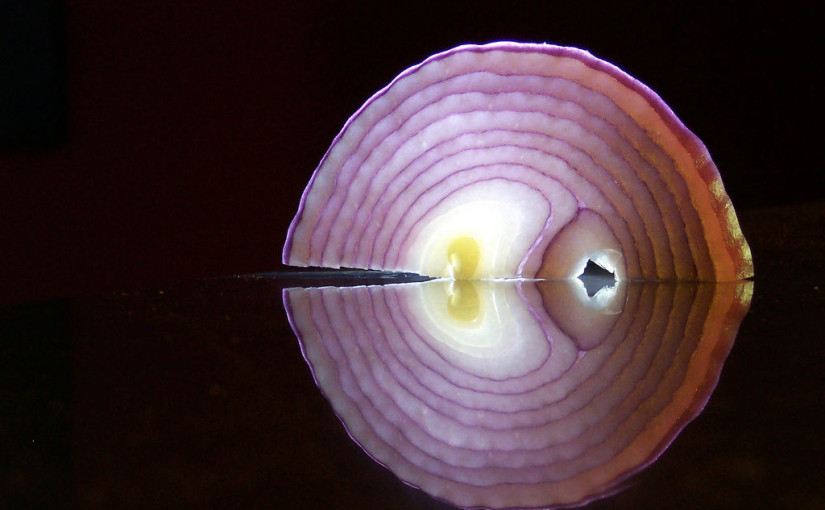 Today I discovered my second favourite way of eating white cabbage. Thinly slice cabbage and red onion, julienne a carrot and a green apple, toss with a dash of olive oil, red wine vinegar, salt, pepper and a tablespoon of mayonnaise.

Yes, it’s coleslaw. I’d never encountered a nice version, and previously thought of it as a vile concoction of soggy mayo-drenched cabbage, but it turns out that, prepared right, it’s a refreshing and zingy dish with a peppery aftertaste.

In fact, several hours after finishing dinner, that peppery aftertaste is still there.

The culprit, of course, is red onion. Every time I have it raw, the taste lingers until the next day, no matter how thoroughly it is washed down and scrubbed away. The reason for this lies with the chemical composition of onions.

Unless cells in an onion bulb are cut open, crushed, or otherwise damaged, the compounds responsible for the taste are not even present. However, once you slice an onion, an enzyme called allinase reacts with compounds that contain sulfur – in onions most notable ones are isoalliin and methiin. As a result of this chemical reaction, various compounds are produced. One of these is responsible for creating the stinging sensation in your eyes, while others, known for their group name as thiosulfinates, contribute to the smell and flavour of onions.

As onions are cooked and ingested, the chemical components break down further, eventually breaking down into a compound called allyl methyl sulfide. To get rid of this gas, we need to breathe it out. If the onion hasn’t been cooked, as is the case with a slice of red onion in a coleslaw, the body has more breaking down to do, and the sulfur-containing molecules hang around for longer.

Still, I believe that a little onion breath is a small price to pay for the deliciousness that fresh red onion can add to a dish. But I’m a writer and sometimes spend a lot of time at home not talking to people, so there’s that.