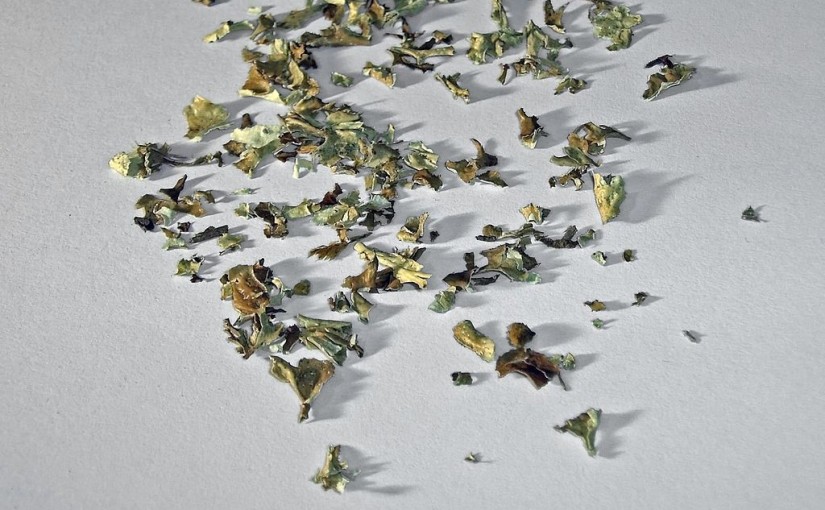 When it comes to herbal teas, where do you draw the skeptical line?

In the Latvian countryside, not unlike elsewhere in North-Eastern Europe, you can go out to a meadow and come back with a variety of herbal teas. Personally, I don’t like the taste, but my family was big on gathering them, so I learned to recognise a lot of these plants, and what their purported effects are. One of these, a rare find, was called “Iceland moss”, except it wasn’t actually moss. In fact, it wasn’t even a plant.

Iceland moss (Cetraria islandica) is a lichen – a composite organism formed in the symbiosis of fungus and algae (or cyanobacteria). Lichens are often believed to be related to mosses, because of their branched, plant-like appearance. But they are very much a class of their own – able to live in extreme environments, grow on almost any surface, and vary spectacularly in their shape, colour, and overall appearance. Lichens are abundant across our planet, and humans have long been using them in food, traditional medicine, and even for producing dyes.

This particular lichen – sometimes found growing on a nearby tree – was gathered, dried, and then used to make a horribly bitter tea. If I ever got tonsillitis, I would use this concoction to gargle, and it seemed to speed up my recovery. Of course, there is no evidence that my throat didn’t just get better from the hot water, or regression to the mean. But it seemed to help better than gargling with chamomile tea.1

But it’s not entirely implausible that an organism such as Iceland moss might contain biological agents that could help with some ailments. According to WebMD, there is insufficient evidence that it does any good – and that’s because studies are thin on the ground. In herbal medicine, wisdom is passed down through word of mouth and hearsay, and a lot of herbs are used rather indiscriminately. Just because something has been “used for centuries”, doesn’t mean it actually works as advertised.

For me as a skeptic, thinking about Iceland moss is an interesting exercise. There are a couple papers here and there showing that traditionally prepared extracts/biological compounds found in the lichen appear to have an anti-inflammatory effect. But there doesn’t seem to have been enough research to reach any definite conclusion.

So here I am – my personal experience with the bitter tea, and incomplete research indicating that the compounds are interesting and may do something. And, of course, appeal to history, which rational inquiry demands to discard, but intuition wants to keep.

If I got a sore throat tomorrow, I wouldn’t gargle with Iceland moss tea, because I have iodine-povidone for that. But if I had nothing else at hand except for the tea, I’d give it a shot.

So, where do you draw the skeptical line?