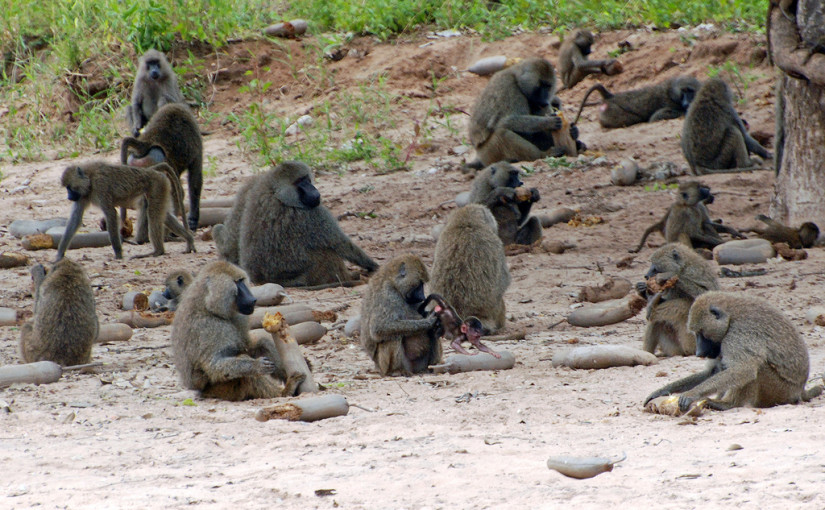 Location, location, location. If you’re a wild olive baboon (Papio anubis), you want to be where the food and shelter is, and to do that, sometimes you have to travel. But how do you decide where to go?

Olive baboons, widely found in equatorial Africa, live in strictly socially-ranked groups ranging in size from a couple dozen to over a hundred. Most of the baboons in a group are females and their young offspring, and they form strong kin relationships, with some females naturally being more dominant than others. They forage and hunt together, because living in a group helps them avoid predators – but choosing where to find the next meal or night’s sleep is no easy task when you’re a wild bunch of baboons.

You might think that a group like this, foraging in the wild, would choose their habitat based on what the most dominant baboon in the troop says. However, this isn’t necessarily the best course of action. What if the leader is forceful, but awful at geography? You wouldn’t want to blindly follow the head baboon as he leads you into a dry, fruitless ditch. Group decision making process is better when more information is analysed, and it turns out that baboons have cottoned onto this as well. It’s a kind of baboon democracy.

According to a recent Science report by Smithsonian Tropical Research Institute researchers and their colleagues from UC Davis, a GPS study of a troop of Kenyan olive baboons showed that, surprisingly, neither sex nor social ranking would determine who leads the group to the next mango tree or watering hole. Instead, the decisions were made by following whoever most successfully initiated a move in a certain direction. For example, if several baboons in a subgroup purposefully started striding east, a majority rule would win and the whole troop would follow these initiators.

But what if there were several initiators with different ideas about the direction in which to move? A conflicting situation like that would lead to a very unproductive fight as the whole group would be stuck where they are. To avoid that, baboons have another simple but fascinating rule, which involves voting with their feet. If the initiators’ chosen direction varies by less than 90 degrees, the whole troop compromises and chooses a middle path between the two directions. If, however, the directions vary by more than 90 degrees, each initiator presents their case to potential followers until they accumulate a majority, which then determines the direction of travel.

To determine all this, the researchers tagged 25 baboons with high-resolution GPS trackers for 14 days, and then used computational analysis to discern patterns of movement. Lead author of the study, Dr Margaret Crofoot, explained in a press statement that despite the intriguing results, these are only broad patterns of movement initiation: “The next step will be to look at context to figure out what motivates individual baboons to initiate movement in the first place, and if some individuals can take advantage of certain situations to disproportionately influence the group.”

The scientists did notice that some individuals in a troop are more likely to successfully lead the way, but they are yet to figure out why this happens. Which means that more baboons out in the wild are about to receive GPS trackers, too.

One thought on “Democracy for baboons | Day 306”